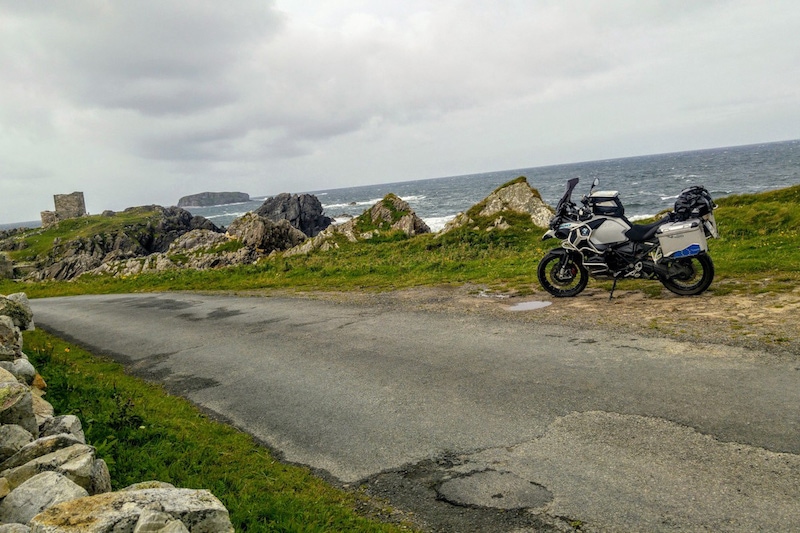 Marc Steinhart has set off on his bike to one of the world’s most spectacular coastal roads – the Wild Atlantic Way, which stretches over 2500 km (1,553 miles) along the west coast of Ireland. By presenting Marc’s personal travel notes on our blog, we accompany him on his route through the fascinating landscape of the United Kingdom and Ireland. But before we reach Europe’s largest island, we have to cross a few countries and the English Channel as well. We start our journey in southern Germany:

A man, a fully packed BMW 1200 GS Adventure and the goal to ride the world’s longest coastal road, the famous WAW (Wild Atlantic Way). Total travelling time only 3 weeks, including the return trip. From my starting point in Germany, my route will take me through the countries of Holland, England, Scotland, Ireland, France and Belgium. An estimated 7000 km (4,350 miles) alone, with a motorbike I hardly know and a camping gear which has been bought especially for this tour shortly before, I head for the adventure. But before that happens, I have to cross my own country.

Chapter 1 – Getting started is the hardest part

I set off on Saturday morning at 6 a. m. in southern Bavaria, near Garmisch-Partenkirchen. I’m headed to the Eifel, to visit an acquaintance. The weather up to then is anything but the best for mid-August. The 650 km (400 miles) are marked by unusually cold temperatures – at the beginning in single digits – rain in all variations and some places with funny names along the route I’ve chosen before. Is this weather a little taste of what awaits me on the British and Irish Isles? I’m gonna have to find out.

After my acquaintance shows me the surprisingly curvy Eifel landscape (your spoiled, being a neighbour from the Alps) on a small day trip, I continue my trip the next day. This time, the destination is a city well worth seeing, Amsterdam. Unfortunately, I spend only one night there and soak up all the impressions of this young and multicultural city like a sponge. Conclusion: I have to come back here again, but with a little more time to spare.

On this very rainy Tuesday the first ferry is already waiting for me in Hoek van Holland. The relatively short crossing (7 hours) to Harwich goes smoothly, a good start for me as a newcomer to ferries. With the first few metres on English soil, it is time to get used to the left-hand traffic. This causes some confusion, especially when turning off onto the right lane. Which lane do I have to take again when turning right or left? You can’t get rid of old habits after only a few metres ride.

Despite the darkness, soon, I am able to find a good but not very cheap campsite in Clacton-on-Sea. All the more, I’m surprised how quickly I can set up my newly acquired tent at almost 10 p. m. in spite of the bad light conditions. Inaugurating the new camping stove with a quick dinner and off to bed or rather the sleeping bag to spend the first night in your own tent.

Stay tuned for Marc’s adventures in the UK and read the second part, soon on our blog!