THE WEISSBORN STORY EPISODE 4: BY MOTORCYCLE THROUGH PAKISTAN 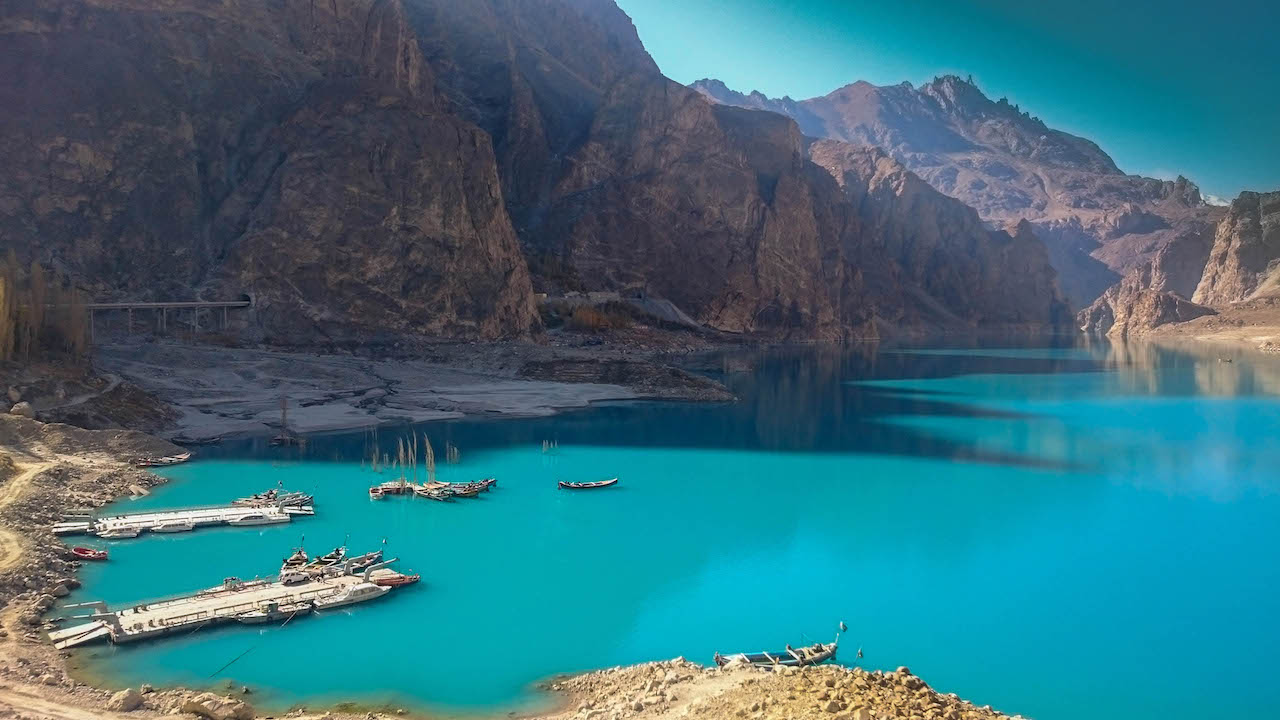 To the left, to the right, in front of and behind me, a pure desert landscape. The wind scatters sand over the street and the last road sign appears to my right, indicating the crossing point between the town of Mirjaveh and a road about 5 km (3 miles) long lying straight ahead and leading to the border of Pakistan.

The section leading through Pakistan is a very sensitive issue, especially for my family and friends at home. The night before I received the last phone calls with great concern, informing me that something would happen to me in this country – kidnapping, assault, being assassinated. But it was my decision to take this step. 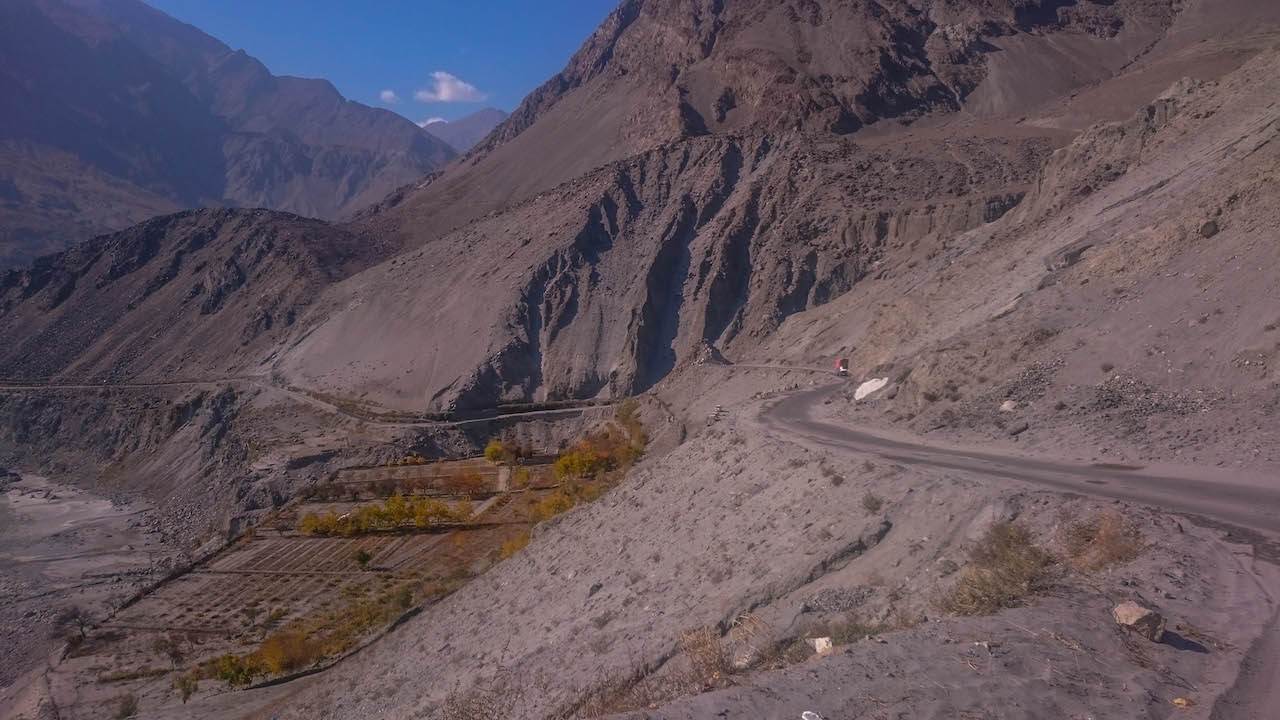 A checkpoint turns up on the horizon. Two soldiers of the Iranian military stop me and prevent me from continuing my journey. “From here on, only with military escort.” A few minutes later four men aboard a solid 4×4 pickup truck appear. The simple task, follow the vehicle. The hooded soldiers on the loading area, armed with assault rifles, wave me to a safe distance, while the driver turns the speed up. We reach the border crossing. No people, the documents are stamped. An Iranian border official is still trying to convince me not to enter Pakistan. At this point, there is definitely no turning back for me. Passing the huge border gate I enter a completely different world. Never before in my life have I experienced such a contrast when crossing a national border. The meagre infrastructure, the people. While the documents are being processed, a police officer is introduced to me and I am told that I will spend the night at the police station. The next day the five-day journey through Balochistan will begin with the police escort. Leaving the police station is not allowed under any circumstances, the friendly policemen offer us to get something for dinner at the market. The cuisine is now very similar to that of India.

After a night on the floor of an office, we will now proceed to the first section. One pick-up, three officers. 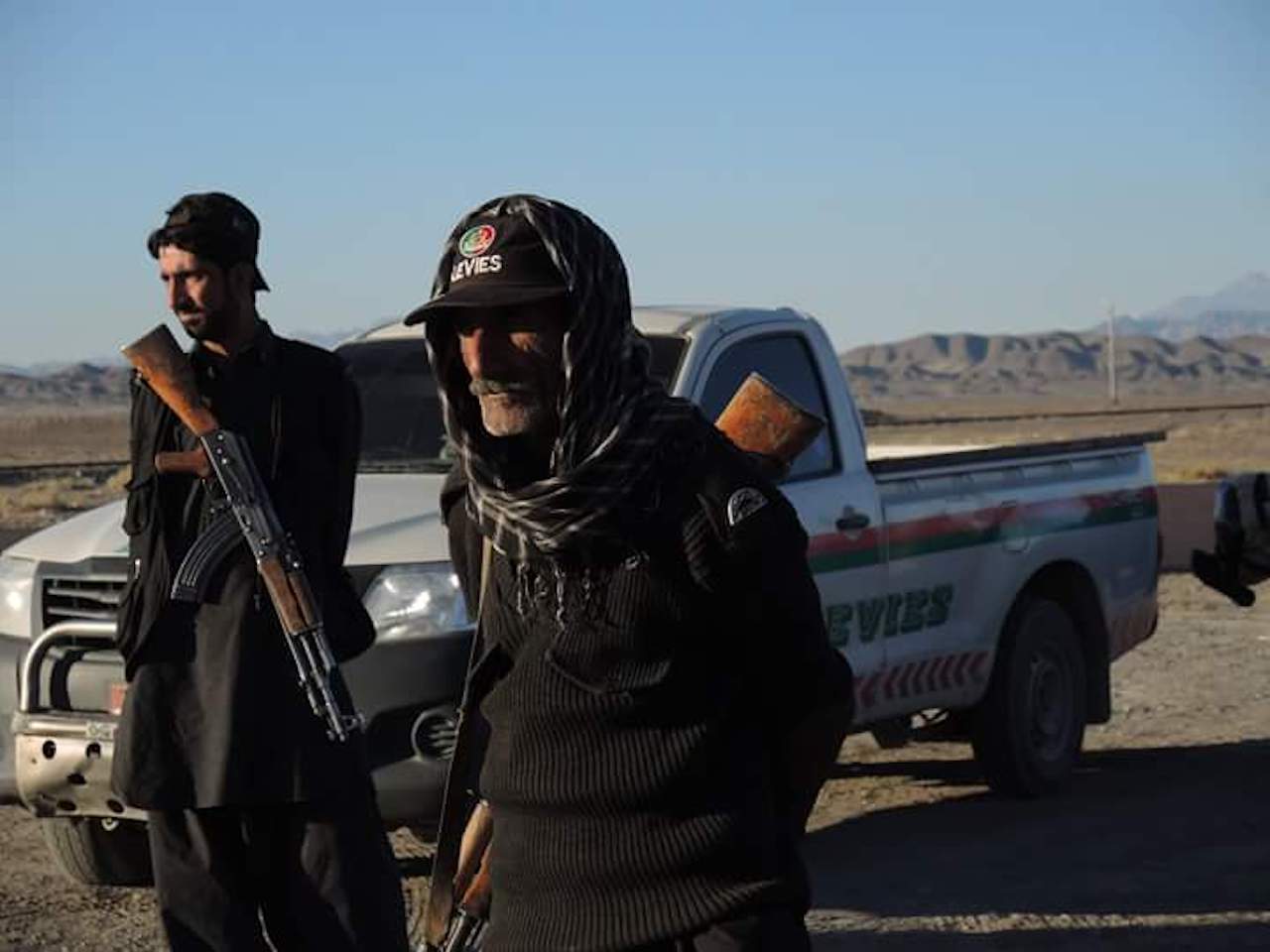 “Start your engine,” the last words of the escort as he’s routinely racking the slide of his AK-47. For a moment I feel like I’m on the film set of Madmax. One last refuelling stop, three 1.5 litre bottles of petrol are refilled and off we go, through the desert of Balochistan, along the border to Afghanistan. A whole day riding in heat, checkpoints at a distance of one hour to the next, where I have to register until we reach a hotel in Dalbandin in the evening. A completely new feeling when a soldier is assigned to me as bodyguard, who will stay at the hotel. But my neighbours from the room next door, Pakistanis working for the UN, invite me to dinner. Traditionally we’re sitting on the floor and eating with our hands. This evening, I become aware of the hospitality the Pakistanis are showing.

At midnight, a power outage occurs in the village with a loud buzzing noise. At first glance, the desert landscape looks like it’s snow-covered in the silvery shimmering moonlight. 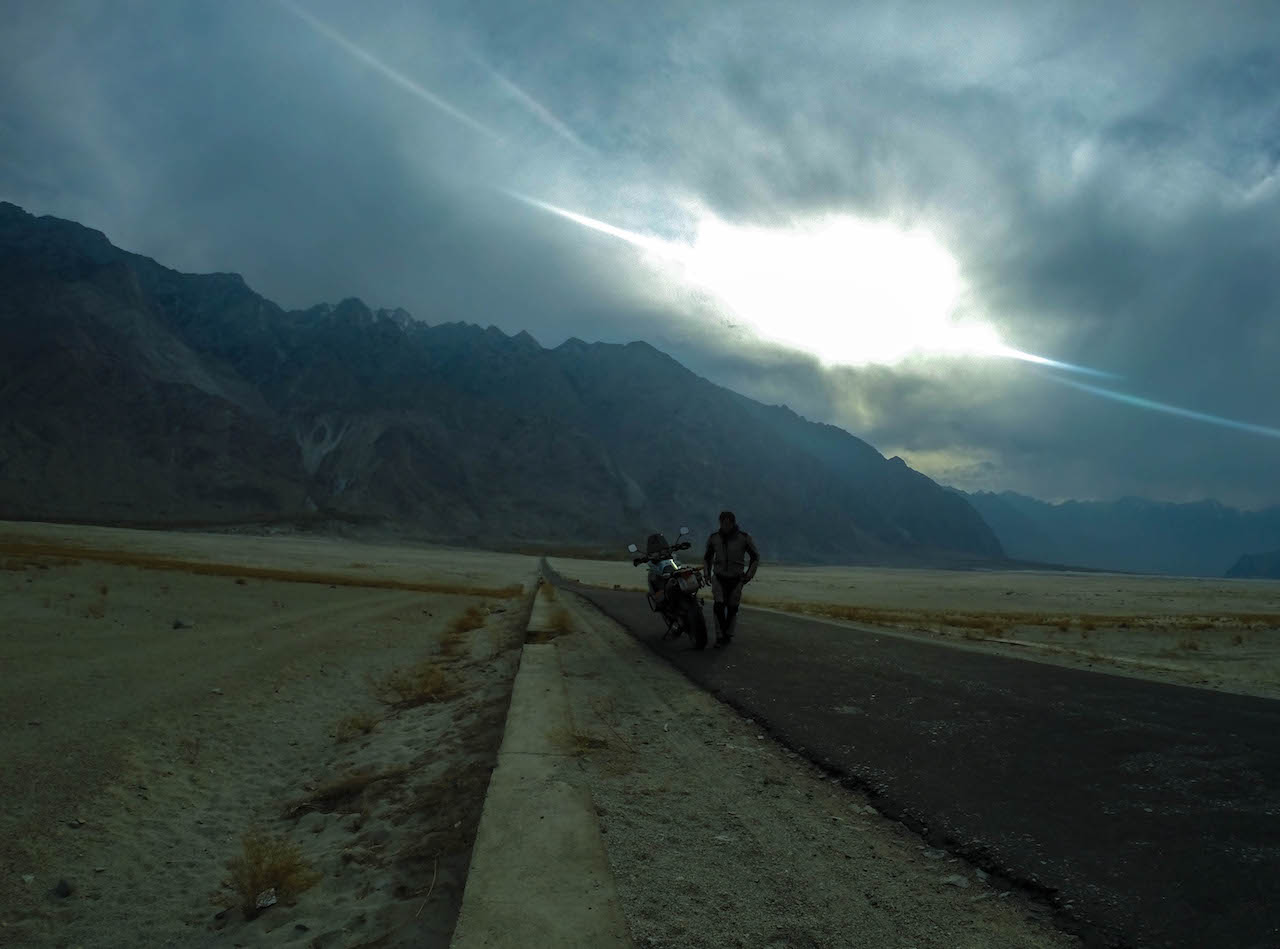 The next few days are characterised by the constant escort through endless desert landscapes and countless checkpoints. I’m held up in the city of Quetta for a total of four days and of course it is not possible to leave the hotel.

Balochistan is still an unsafe region, only three days after I left the city of Quetta, there was an attack at the local police academy – a total of 60 cadets were killed. However, security is in the eye of the beholder. If we add up the number of people who die in “shootings” in the USA and compare the number of population – Pakistan with about 200 million inhabitants and the USA with about 320 million – this raw statistics show that the USA and Pakistan should be at about the same level of security. 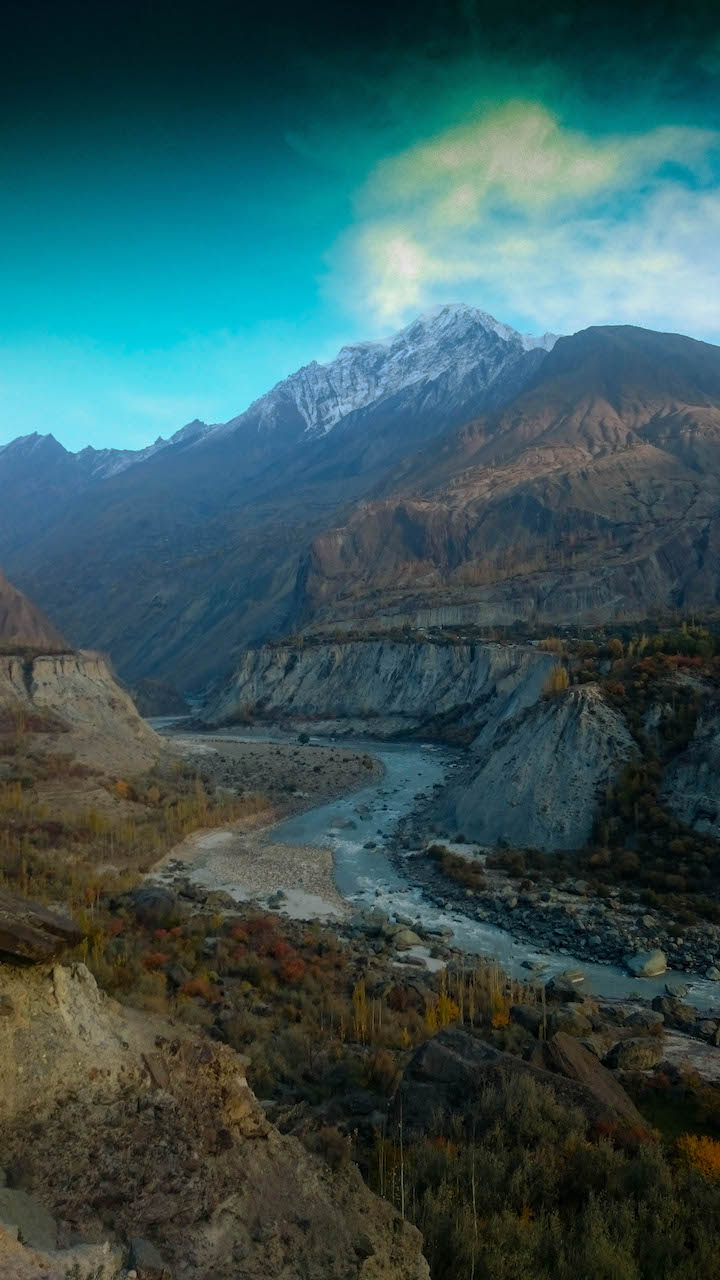 But at this time I’m already in Lahore and can either cross the border to India directly or explore the north towards the Karakorum Mountains. Of course, my family and friends advise me to leave the country as soon as possible. In taking this decision I would have missed a lot of things, as it turned out later.

Breathtaking panoramas awaiting me every day, the eight-thousanders and incredible expanses of space. The world is so peaceful and the people are friendly. A small village called Hunza, beautifully situated in the mountains, is even a so-called Blue Zone, where the population has a very high life expectancy. The journey towards Skardu, along the Indus River, leading up into a valley with a cold desert and to the foot of the K2, the second highest mountain in the world. The countless milk teas and numerous invitations of the locals, make me feel like a true adventurer being the only tourist at that time – I haven’t met anyone else in one month. 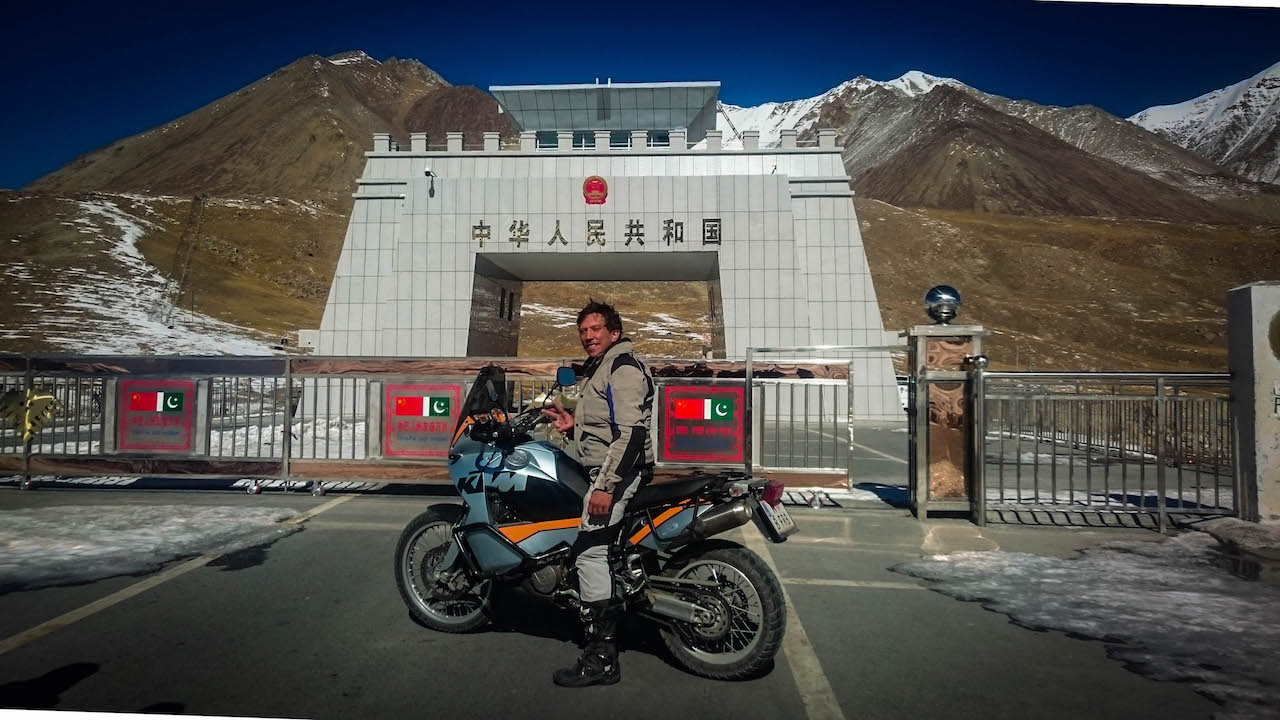 The Pakistanis are proud and make the trip to one of the highest border crossings in the world at the Khunjerab Pass and thus to the gate to China. Once there we went back south, the direction of chaos, into the masses of people, cars, tuk-tuks and countless mopeds. To Punjab and the border to India. A country that could be a continent with about 1.6 billion inhabitants.