NUVIZ, THE FIRST HEAD-UP-DISPLAY FOR MOTORCYCLE HELMETS – A REVIEW 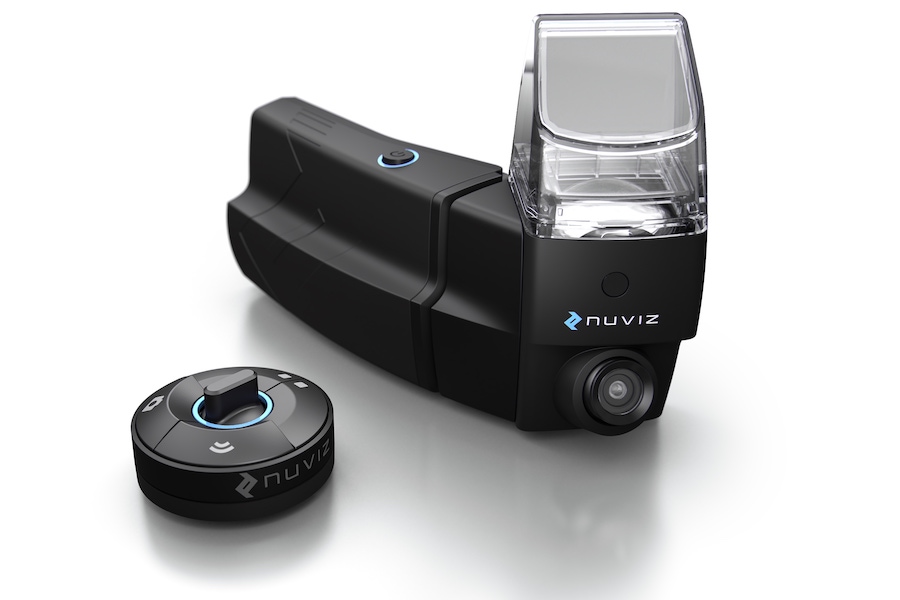 Originally used in the aviation sector, cars are also regularly equipped with it for quite some time, but there has never been anything similar for everyday use for motorcyclists. We’re talking about head-up displays, aka HUDs. Now, the company NUVIZ brought a HUD for motorcyclists onto the market for the first time! We tried it out for you.

The NUVIZ-HUD weighs about half a pound (250 grams) and has a replaceable battery good for eight hours on a single charge (via Micro-USB). It mounts with a plate to any full-face helmet onto the chin bar on the right side. As the plate is attached using simple double-sided adhesive tape, we were quite sceptical at first if the high-quality device would stick tight to our helmet. Our concerns were totally unfounded, it stuck, steady as a rock. Once we switched it on with the (single) button on the HUD, we just had to pair our smartphone via Bluetooth using the NUVIZ app. A second component of the product, the (remote) controller, with its buttons you can operate the HUD intuitively, preferably is attached to the handlebar with the enclosed mounting frame and now, you’re all set to hit the road. 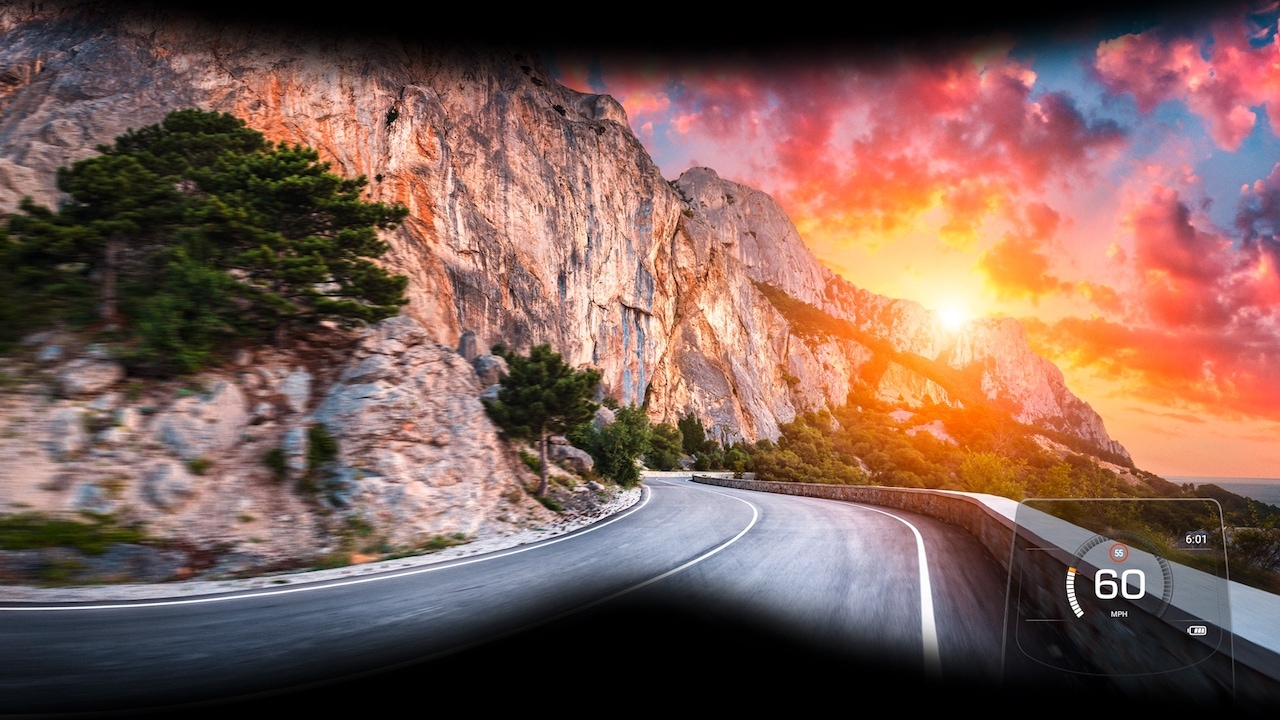 What features you can expect from the NUVIZ-HUD? One of the most substantial and useful features is navigation for sure. With the innovative head-up display, the times are gone when you had to mount your navigation device to the handlebar. You just enter a new route into the app, start the trip and from this point, you can put away your smartphone. Navigation is based on the built-in GPS transmitter of the HUD, so once you’ve entered the route, you no longer need your phone (or mobile coverage). The translucent prism projects the motorcycle’s speed, including a warning when you hit the current speed limit, and navigating instructions slightly below the rider’s natural line of sight. Directions are given using classic turn-by-turn navigation, by pushing a button on the controller you can e. g. choose an additional map in 3D indicating your current position to which you can also zoom in and out. Voice instructions are available as well – the included headset is simply added to your helmet. When it comes to navigation, the HUD easily demonstrates its biggest advantage: the rider remains focused on the road, common distractions like a quick look at the speedometer or at your handlebar-mounted mobile for navigation are completely eliminated.
The headset allows you to make phone calls during your ride as well. All contacts and your latest call list are automatically imported from your phone, you can accept or decline incoming calls. 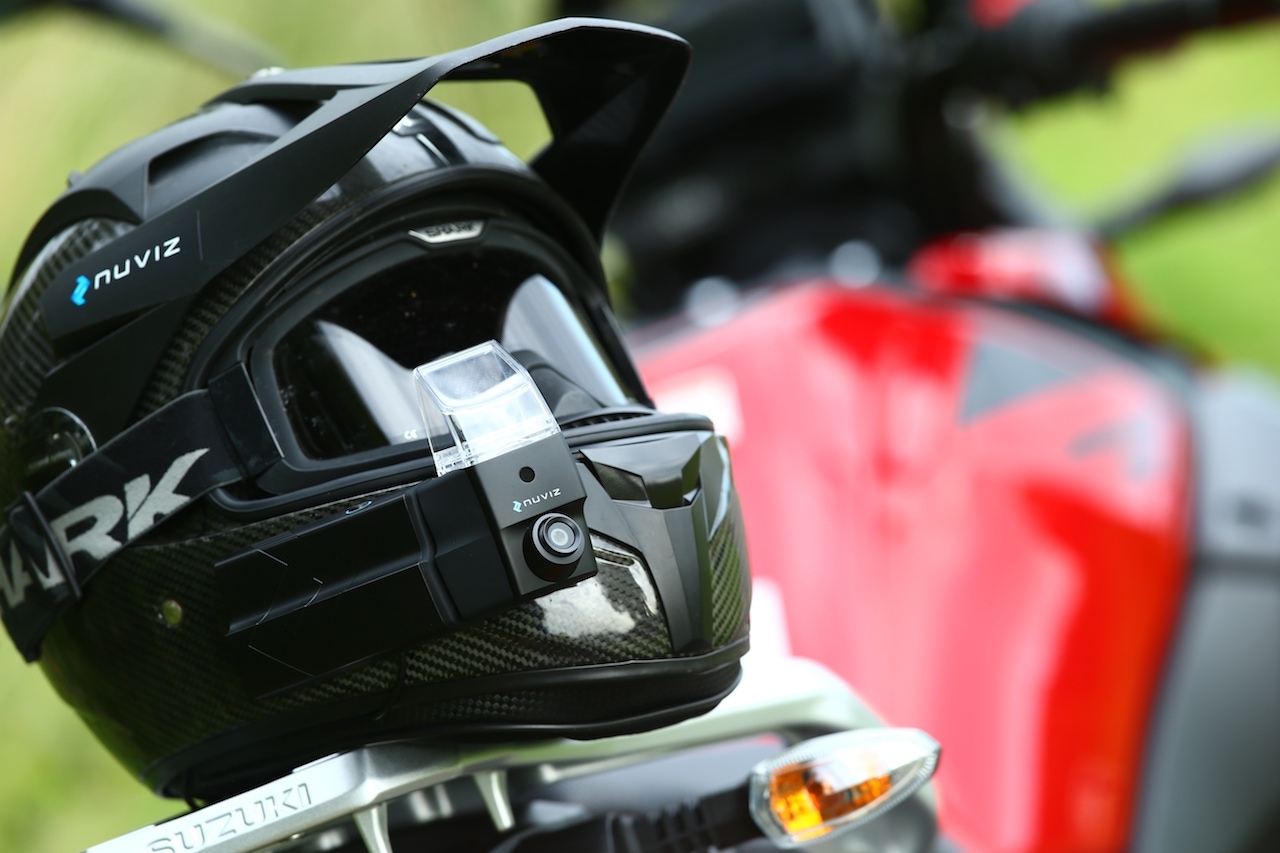 Enjoying some music while you’re on the ride is easy, thanks to the good sound quality of the headset’s headphones. You can stream your favourite music from your smartphone using current platforms like Spotify, Apple Music, Pandora or Google Play.
One part of the headset can especially be used with another great feature of NUVIZ, it’s the mic – the integrated camera of the HUD allows you to document your route by making photos and videos. So you can provide the latter with live commentary during your ride, and they’re saved directly to a microSD card in HD (videos in 1080p, photos in 8 MP). To initialise the photo/video function you just have to press the photo button on the controller – once for a photo and twice to start a video recording. Captured photos are transmitted to the smartphone simultaneously and thus can easily be shared on social media at your next stop.

To sum up: the NUVIZ-HUD is much more than a geeky gadget for motorcyclists. It minimises the risks of possible distractions during the ride of your bike essentially and with the various useful features every motorcycle trip becomes more comfortable. A software update in the near future will add voice assistance (Siri and Google Assistant), offline route planning and a passenger intercom as well. 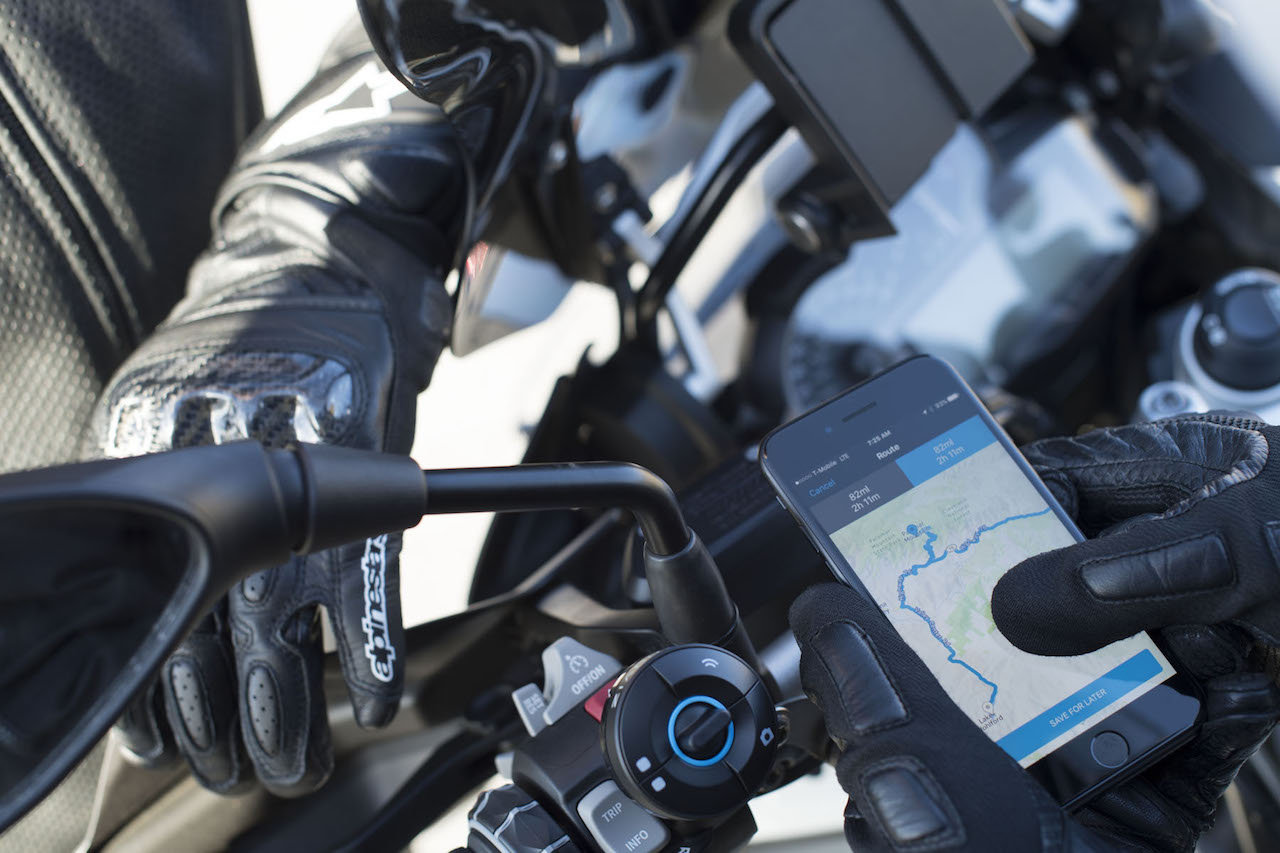 The HUD comes with an intuitive and logically structured menu interface making its use effortless and during our test, the pairing with the smartphone worked perfectly as well. Specifically during longer trips, the device reaches its full potential and with its support, the rider can easily focus on the route and the riding experience … you don’t necessarily have to pick up every single call 😉