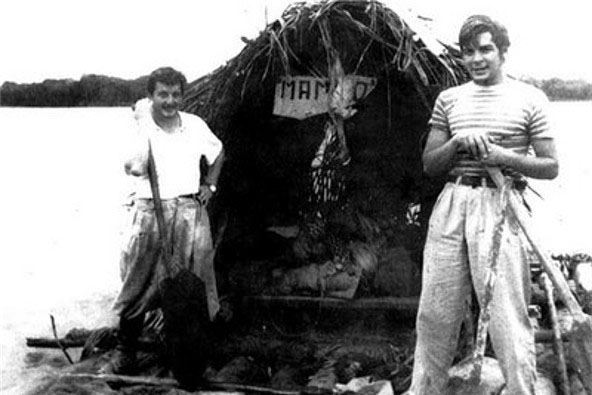 “Travelling is the yearning after life,” as a quote by Kurt Tucholsky says. Thus, life’s premise shouldn’t be just living for the moment but experiencing life with great awareness and consciousness. Likely he is simply referring to that conscious living everyone is talking about but never experiencing it…at least those who don’t own a motorcycle. With reports circulating about it for thousands of years, like the one of Moses wandering in the desert on foot, the more recent one of Christopher Columbus travelling to America by ship or the more modern one of Charles Lindbergh crossing the Atlantic Ocean by plane.

A journey which is much easier for us to retrace but nevertheless a life-changing and world-changing experience, is the one by Argentines Alberto Granado and Ernesto Guevara. They travelled across South America on a 1939 Norton 500cc nicknamed “La Poderosa II” (“The Mighty One II”) for eight months. Guevara later wrote a book about it called “Diarios de Motocicleta”, the film of the same name, “The Motorcycle Diaries “ (Director: Walter Salles), was made in 2004, with additional context supplied by Granado’s report “Traveling with Che Guevara: The Making of a Revolutionary”. One year after the film’s worldwide theatrical release, the number of tourists travelling to South America increased by 22 per cent, according to Lonely Planet. Argentina, Bolivia, Cuba and other countries began signposting the motorcycle route so it can be experienced, preferably by riding on a motorcycle. Nowadays, no one has to paddle across a river, there are ferries in operation and souvenirs to buy. As often the case, compared to the initial expedition, things got more convenient to some extent. However, because of its length, 14,000 kilometers (8,700 miles) (!), it is still an adventure. 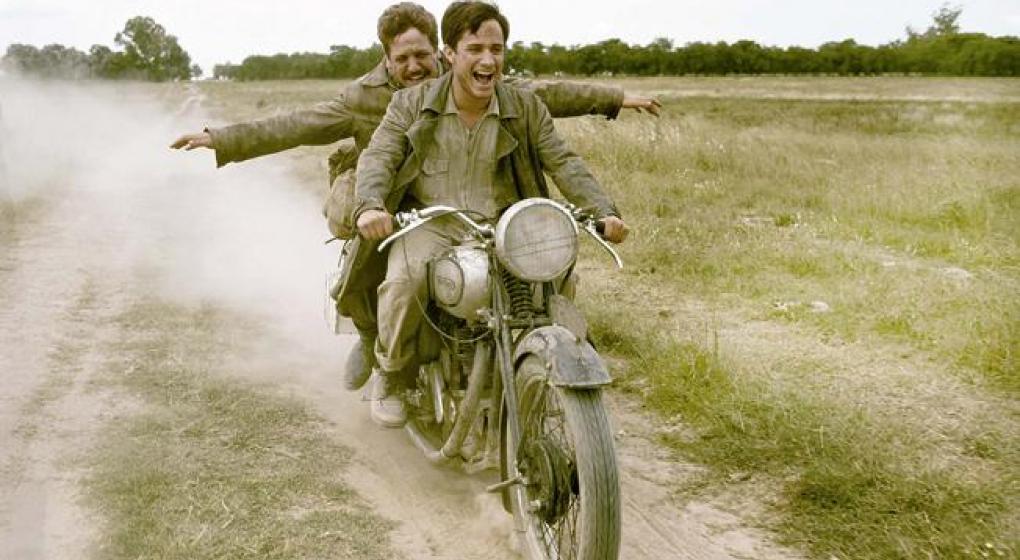 The journey begins in San Francisco del Chañar, a small town near Córdoba – by the way, Guevara ended his first voyage there. In 1950, he fitted an engine to a bicycle and traversed 4,500 kilometers (2,800 miles) through the northern parts of Argentina.

4,500 kilometers, that’s the air-line distance from Madrid to Moscow. In San Francisco del Chañar he took a stop at his student friend’s place, Alberto Granado, who ran the dispensary of the local leprosy centre. Guevara returns two years later and together they embark on a journey to finally satisfy their yearning after life.

Their first stop is Miramar, a small seaside town on the Atlantic coast of Argentina and, incidentally, also the place where Guevara’s girlfriend, Chichina, is spending the holidays with her family. Still lacking experience with the bike, which is overloaded as well (among others, a dog as a gift for Chichina), they’re almost hit by an oncoming car on the first few meters of their 1,300 kilometer (800 mile)- section. It’s a baptism of fire for the bike, while the two adventurists get away with a few scratches and the dog survives. It’s all going smoothly. They stay for eight days, instead of the initially planned two days. A 22-year-old’s yearning after life cannot only be fulfilled by travelling. He left the dog at his girlfriend’s place and she handed him 15 U.S. dollars to buy her a bikini in the USA. (Spoiler: Although Guevara made it to Miami, there are no historical records on the bikini.) 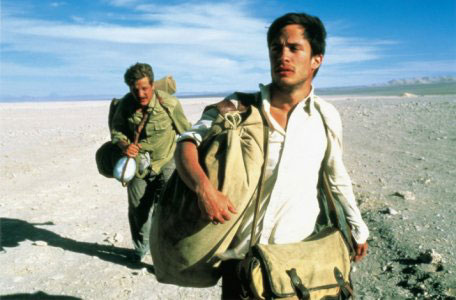 Next stop, the city of San Carlos de Bariloche, a trip of 1,400 kilometers (870 miles) in distance again. To get there, they have to cross the Río Negro territory. A seemingly endless journey riding through a seemingly even more endless plain, the white mountaintops of the Andes as a constant presence before their eyes…but they’re never getting any closer. There were no paved roads back then, so they can’t go faster than a horse galloping at full speed.

San Carlos de Bariloche is situated in a valley of the Andes on the shores of Nahuel Huapi Lake, one of the largest lakes in Argentina. As their journey was meant to be an eye opening experience that helps them finding new awareness, a brief digression: Nahuel Huapi means in Mapuche language “Island of the Jaguar”, and the Mapuche form part of the legends surrounding Guevara’s nickname “Che”. The name Mapuche derives from the words: “mapu” = land and “che” = people. So maybe the term “Che” doesn’t derive from Spanish, where it means the same anyway, but is instead a Mapuche loan word. 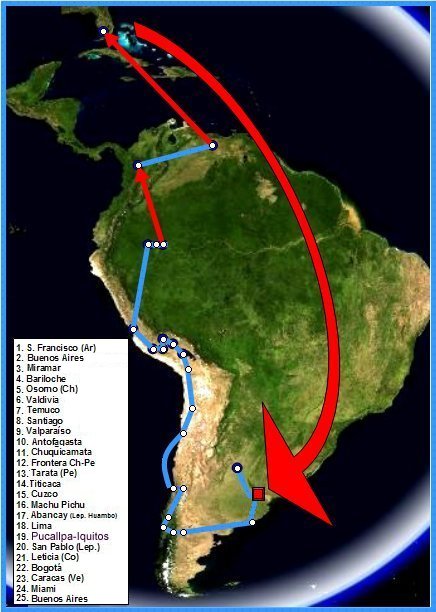 The surroundings of San Carlos de Bariloche slightly remind of the Austrian Alps, like sort of a magnified Zillertal (“Ziller valley”), much larger and wider and situated at a huge lake. Although February and March are summer months in the Southern Hemisphere, Granado and Guevara have to ride further across the snow-covered mountain range to reach their next stop. They have only blankets and caps to protect them against the cold. The Norton is causing trouble too, no blanket or cap for its protection. It is acting hypersensitive and sometimes has to be pushed. Turns out, the Mighty One isn’t so mighty when the temperature drops below zero degrees Celsius.

In traversing the mountains, they reach Chile and the city of Osorno by boat, as a lake is preventing them again from taking the shortest possible route. This leg of the journey is covering a mere 2,000 kilometers (1,240 miles), however, having crossed the Andes and reaching the Pacific side of the continent where the weather is better, they’re travelling along much faster. In Osorno, they pretend to be experts in leprosy, a hoax, which is gaining them publicity from an article in a local newspaper. The simple reason for their exaggeration was, as they certainly weren’t experts on leprosy, that quite frankly, they had run out of money. While erecting their tent in the Andes, it got blown away in the middle of the night, so they are constantly begging for a place to sleep. In that case, it comes in rather handy if you’re a world-renowned medical expert. They are keeping the newspaper’s article as kind of a proof that it’s really great to host two stars rather than virtually two vagrants.

The trip proceeds to Valdivia on the Pacific coast (only 100 kilometers away) to head up north to the volcanic region surrounding the city of Temuco (160 kilometers away). Once there, it’s time again for a visit to a repair shop. Newspaper clipping in hand, swoosh, there you go. The bike can be fixed but they must leave Temuco in a hurry, as Ernesto, still longing for Chichina, took the mechanic’s wife for a slightly too advanced dance. The men in the village did not like it at all, being ready to take on a fight.

The last leg of their trip takes them to Santiago de Chile (680 kilometres), the capital of Chile. The motorcycle conks out again, but at this time, is really irreparably damaged. The Norton lasted for approximately 5,600 kilometres (3480 miles) comprising of field paths and gravel roads, withstanding numerous accidents, and sometimes even only a quick glance could have let it fall over.

After only one and a half months the motorcycle adventure was over, for the remaining distance they hitchhiked mostly or walked. Other key places of their trip include the Chuquicamata mine, back then, one of the deadliest and most inhumane workplaces which still is one of the world’s biggest employers today, and finally, a leper colony in the Amazon. At the end of their journey nothing would ever be the same in the lives of Guevara and Granado, this may seem dramatic but their story illustrates it well enough. The only remaining witness of this historical side issue which should cause great effect is the Norton, now an exhibit at the Che Guevara Museum in Alta Gracia, Argentina.