THE WEISSBORN STORY EPISODE 7 – THE CROSSING OF MYANMAR 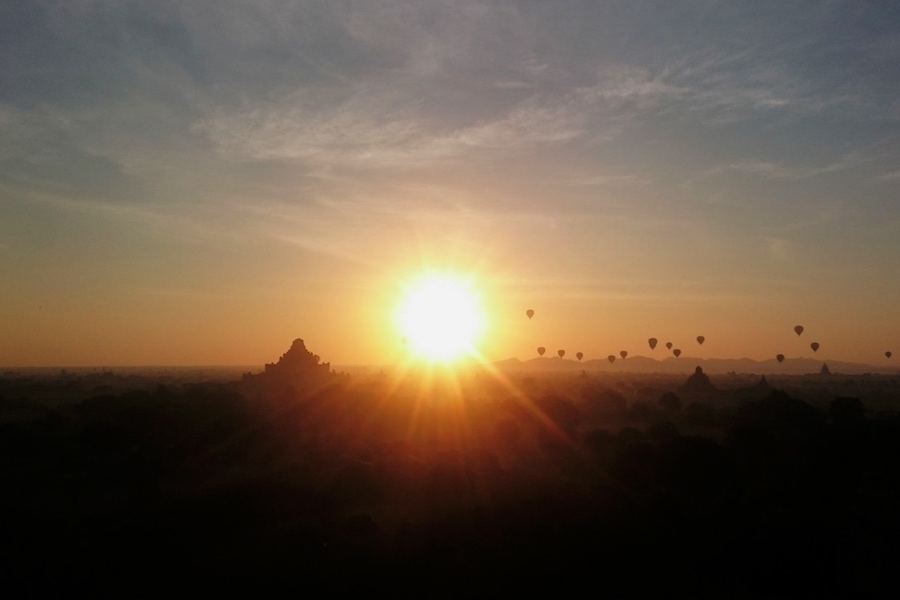 In southern Nepal, there is only one single highway heading east. We approach the Indian border and dive into the crowd again. We drive along the road; the sunset in the back, left and right the tea fields.

The density of people is diminishing and we are passing through a village where a white person has never been seen before, at least according to the owner of the restaurant where we take our lunch. Immediately the whole village appears and a policeman guards our motorcycles with a submachine gun. After several photos and the offer of two fathers to hand me over their daughters to marriage, two thankful cancellations from my side and a stop at the ATM the journey continues.

Nora and Joe don’t notice my sign that I will visit the gas station across the street. While the tap hangs in my tank, I see the two just passing by. After I’m done, I let the engine howl and follow my two traveling companions. An overtaking maneuver and a scooter comes towards me. The driver looks at me with an absent look. My emergency turn is useless in this case and he gets on my lane. A frontal collision. I am alright. Two cars stop. Screams. I am stopped and accused. The couple, who was traveling on the Scooter, got it. Limping, they pull the parts of their Scooter off the road.

I had to manage not to get the police involved, because that would lead to massive delays and unforeseen events. After a few minutes, the first emotions cooled and we agree on a payment to repair the bike: 100 euros converted. Although this was far too much, it saved me a lot of time and even more trouble. In the meantime, my travel partners are already back, someone told them, that I was involved in an accident. Luckily, nothing much happened because the two had expected worse. 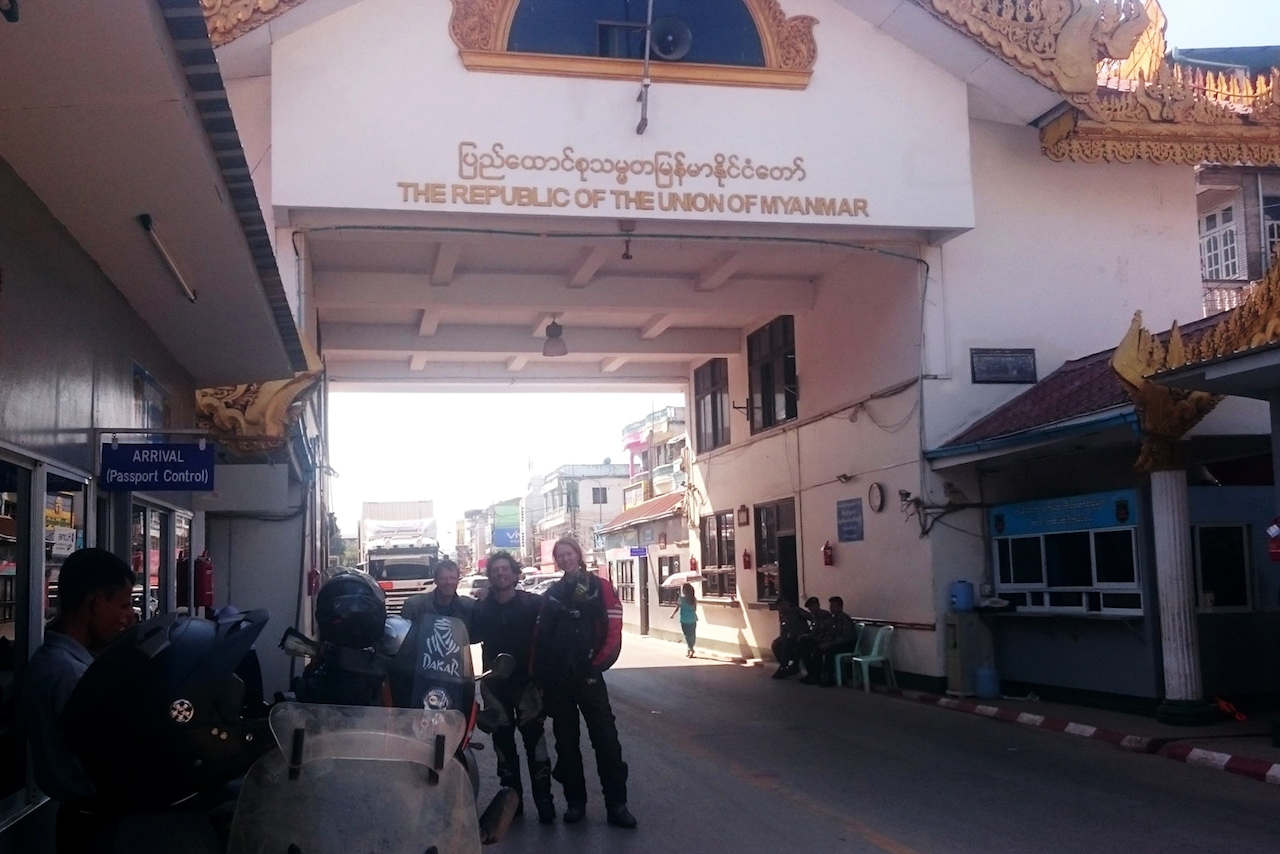 For the next few days, we travel as fast as we can, as we only have a few days to reach the meeting point with our tour guide on the border of Myanmar. The last night we spend the first and only time in a tent camping in the wild. It was a beautiful place, in the state of Manipur, on the seemingly endless lakes. At night, the seascape of the Loktak lake transforms into a sea of stars, shaped by the lights of small fishing boats.

The day breaks and early in the morning we drive the last 150km into the mountain range of the Arkan Joma Mountains, where we spend a day washing our clothes and saying goodbye to India. We have reached the official border between South Asia and Southeast Asia.

Crossing the border between India and Myanmar is only possible thanks to the presence of tour guides from Myanmar. After the procedure is finished, we go to eat. The first time with chopsticks. I enjoy the strong contrast with a hot noodle soup.

The journey through Myanmar is as travelling through a different time. We pass the border into the tropical climates. After a few hours following our escort party, we arrive at our accommodation. To cross Myanmar by motorbike or other vehicle, an escort party is required. We have negotiated an offer, which is about € 100 per day per person. We get only the best hotels and enjoy the extreme luxury after months of nights in tents and cheap accommodations. The tour was totally different: total comfort, we did not have to worry about anything. Hotels were booked and we did not have to be concerned about technical issues as we were constantly traveling with our guide.

We don’t have much time in Myanmar. Ten days and approx. 2,000km, with an average cruising speed of 30km / h. The plan is in place and we drive in convoy through the country, wave to the villagers and visit one huge temple after another. According to unconfirmed reports, residents of Myanmar spend about 10% of their income on their religious practice. A ritual intended to promote happiness and prosperity is decorating Buddha figures with gold leaf. The Burmese spend a large part of their low income on this.

That’s visible throughout the whole country. Never before have I seen so much gold. 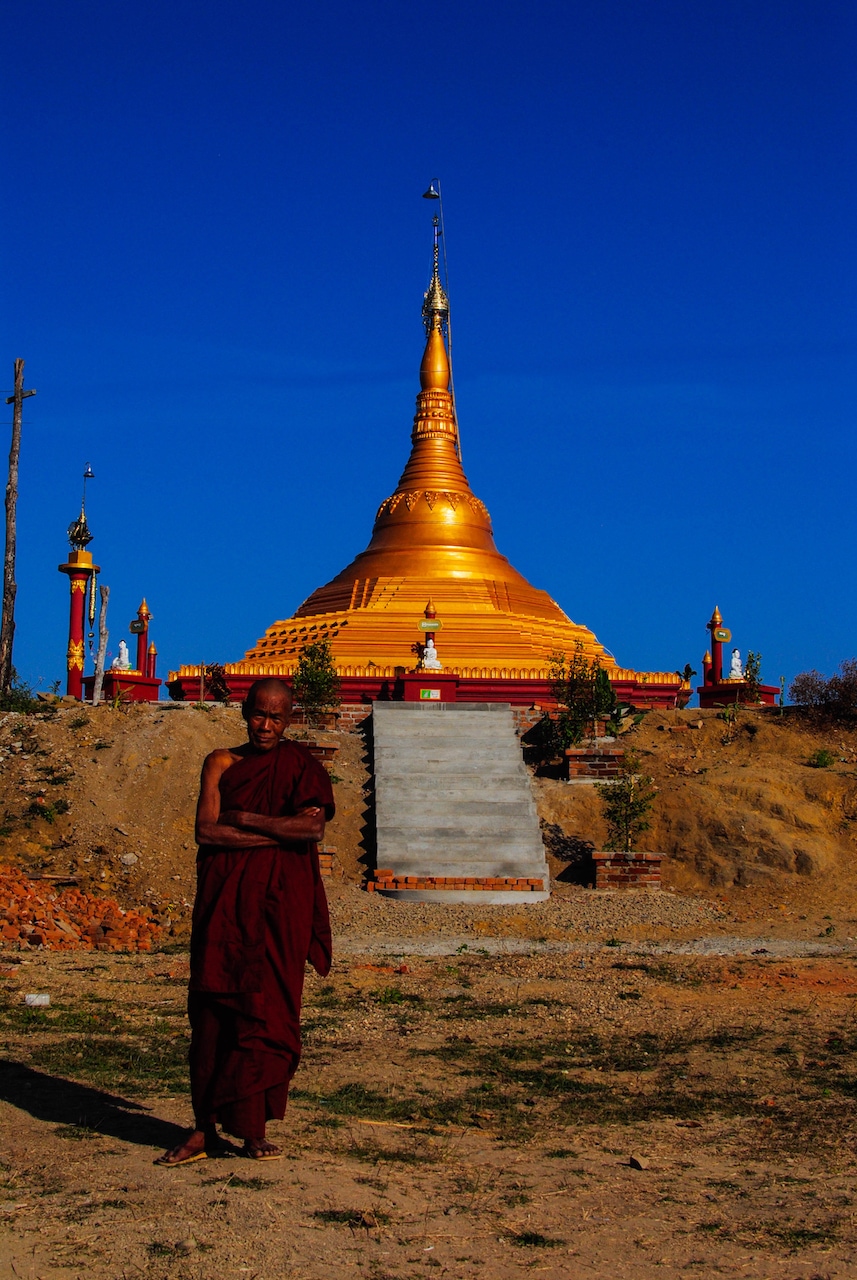 We are getting closer and closer to the main attraction: the temples of Bagan. From more than 10,000 temples from the 11th to the 14th century, around 2,000 have survived to date. The special thing about this place is to climb one of the temples before sunrise and then enjoy the morning. Hot air balloons soar above the horizon. A truly unique moment. There is not a single day that we do not travel, so we head south, to the former capital Rangoon and back to the northeast and towards the Thai border.

The last stop is at the Golden Rock, a huge rock on a mountain overlooking the green landscape. My memories of the land are full of temples. Myanmar is a deeply religious, Buddhist country. Ten days were just too short. Ten days with escort. Crossing the border with Thailand, we have a small jump of joy over the newly gained freedom! Paradise is in front of us. The evening before we the decided at dinner to explore Thailand as a trio. A new adventure awaits …