TRIUMPH TIGER 1200 – A TEST BY MOTORRADMAGAZIN 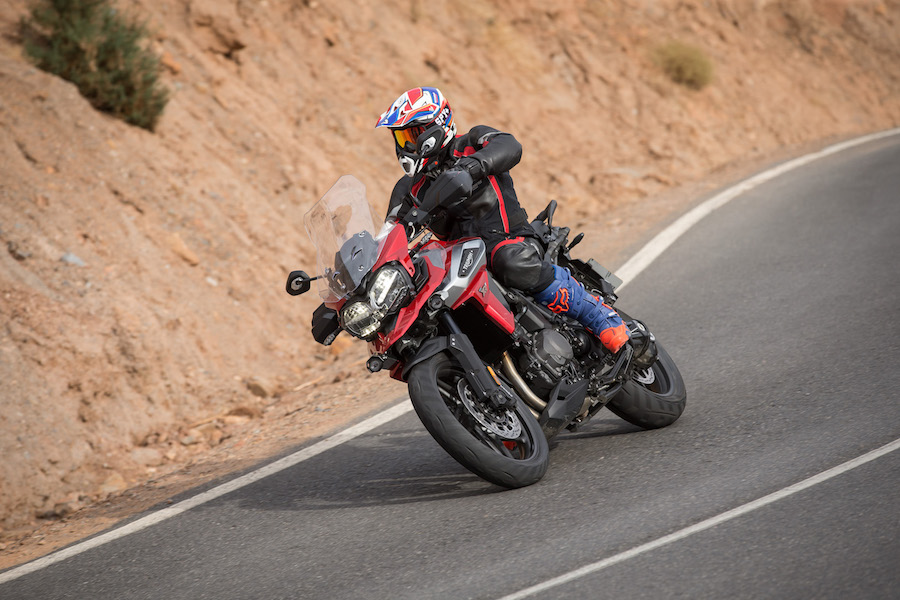 The dried-up river bed blurs in front of my burning eyes. Drops of sweat tickle on the scalp under my motocross helmet. Even the Gore-Tex membrane seems to have long since given up its mission of allowing water vapour to pass through to the outside of my riding suit. In the sauna, now would be the time to pour water onto the rocks. But it’s late autumn in southern Spain and I never thought I would get so sweaty when riding a motorcycle at just over ten degrees Celsius. The cause of my hot flashes, however, is by no means the faint rays of the sun, rarely blinking behind the dense clouds anyway. In fact, the new Triumph Tiger 1200 XCa fuels the fire that creates the steam – or, to be more precise, the deep sand through which I’m pushing around the flagship model of the British long-distance enduro with an open throttle grip and at full tilt.

Even though I am standing on the wide footrests, I shift the weight far away from the front and keep up the revs at 90 km/h in third gear, the 19-inch Pirelli Scorpion front wheel momentarily keeps losing track on the desired driving line in corners. Keeping control of a bike with 248 kilograms of dry weight plus 20 litres of fuel on this off-road track gives your heart rate a real boost. It demands total concentration – who wants to see 22,950 Euro smashed up on a rock at the edge of the road (or even in the middle instead of on the sideline)? 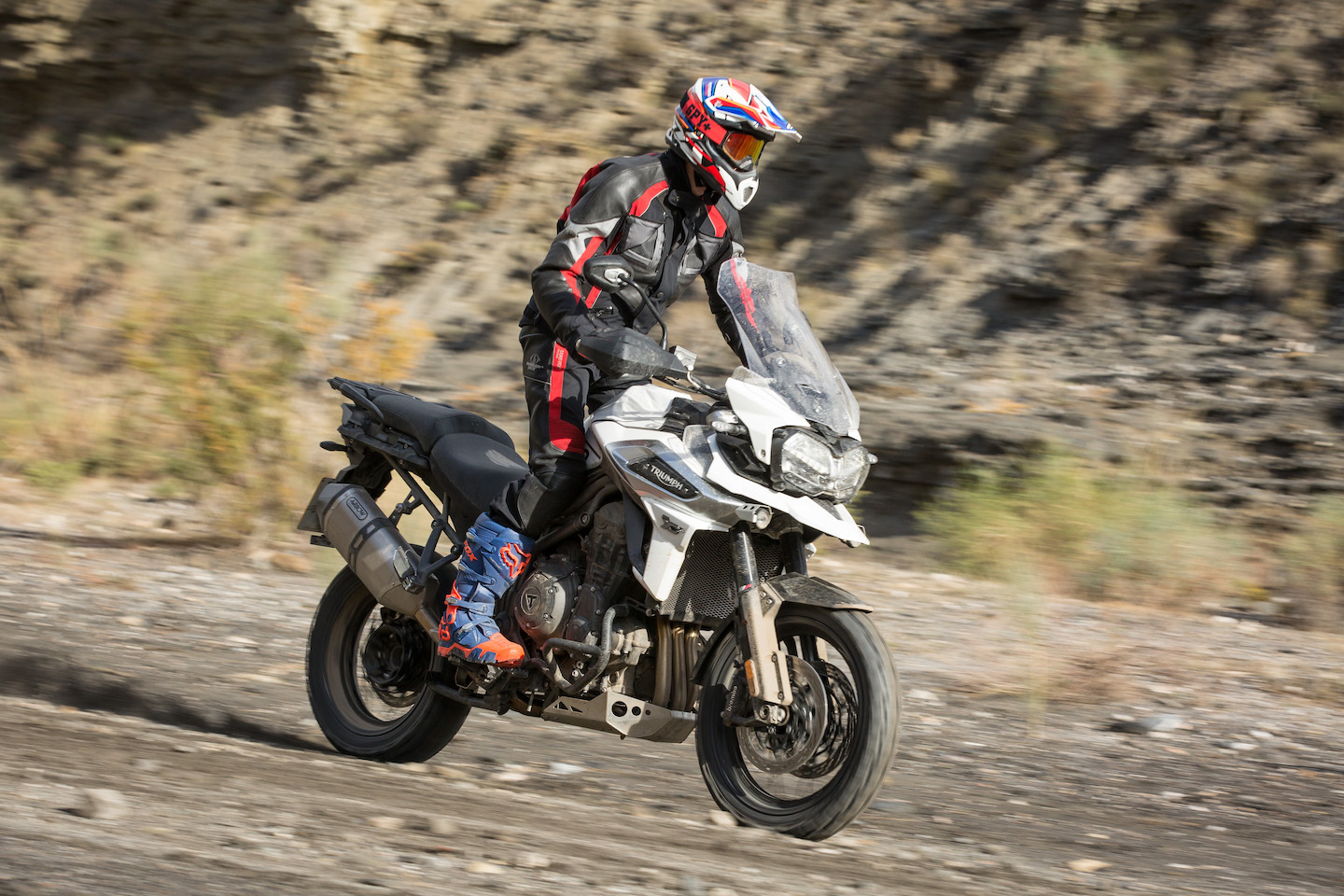 No doubt about it, the Tiger 1200 XCa still weighs far too much for real rally ambitions, despite its 11-kilogram weight loss, and, besides, the two-kilo weight-optimised XR base-model (17,800 Euro; without the semi-active suspension, 5-inch TFT display, keyless ignition, etc.) of the five different model options would probably not make riding much easier for me on loose surfaces at a weight of 242 kilos. Even after the extensive update, the asphalt remains the favourite hunting ground of the Tiger 1200 – anyway, for hardcore off-road aficionados there is the lighter Tiger 800 in Triumph’s portfolio. I am relieved when the sand finally turns into a gravel road – and the big cat between my legs seems to prefer it as well. Exploiting its strength on paved paths, the Tiger 1200 follows the steering impulses right from the start. Traction control in off-road ride mode controls the wheel slip and drift angle with ease, and the front wheel ABS, in combination with the rear wheel cadence brake deactivated, will cause you to stop in your tracks at an emergency braking. It’s unbelievable, how fast and foolproof the substantial weight of the Tiger can be brought to a standstill even off-road if necessary. The electronic TSAS suspension with WP components and 190 millimetre travel lets the Tiger 1200 XCa float over uneven ground, even at full gallop, and conveys a secure feeling of stoic imperturbability. My mood is increasing, the speed as well – what could be nicer than to let the wind dry the sweat and to leave fat tracks on the ground on corner exit? 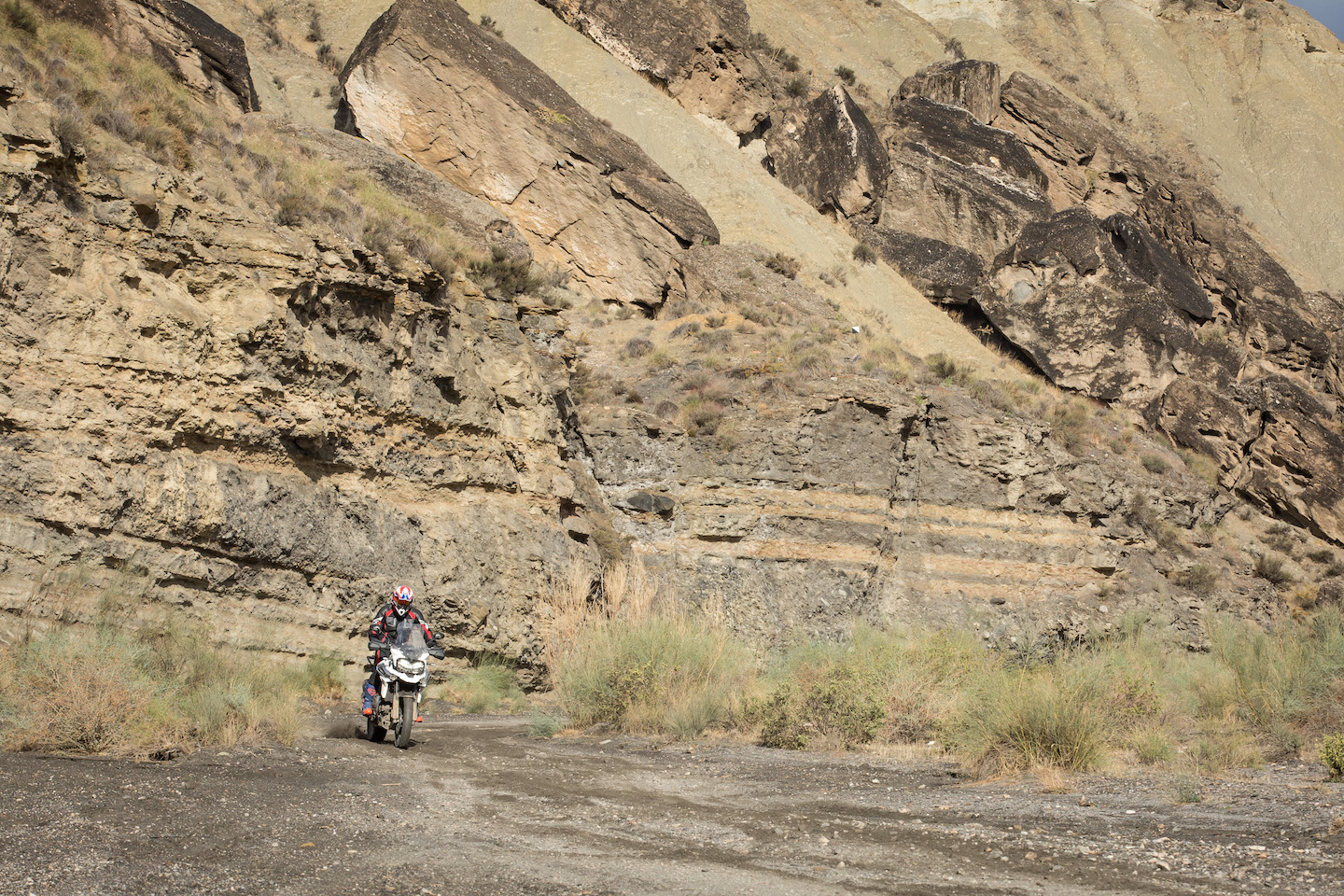 As the gravel road eventually leads to a winding asphalt road, the new intuitive 5-way joystick on the left bar switches from off-road mode to sport mode in a matter of seconds. The roads full of bends and turns of the Spanish hinterland reveal the most serious improvement compared to the previous model in an impressive way: inside the 1,215cc three-cylinder engine, the crankshaft and flywheel mass have been reduced in weight – the lower rotating masses provide the new Tiger 1200 with an unprecedented level of agility when changing lean angles from one side to another. It is child’s play to manoeuvre the Triumph at corners of all kinds and it impresses with a great road grip and absolutely neutral steering. In addition, the XCa top version of the long-distance enduro scores with generous luxury and comfort: the gear shift assistant works perfectly even when clutchless downshifting, the height of the efficient screen is electronically adjustable and regulated by a joystick, and the adaptive cornering lighting maximises visibility during night riding. Titanium Arrow silencer, height-adjustable rider’s seat (20 millimetres), hill hold control, powered sockets (12V), cruise control, heated rider and pillion seats as well as heated grips are standard equipment – and the enhanced rider ergonomics of the Tiger 1200 XCa are first class as well. 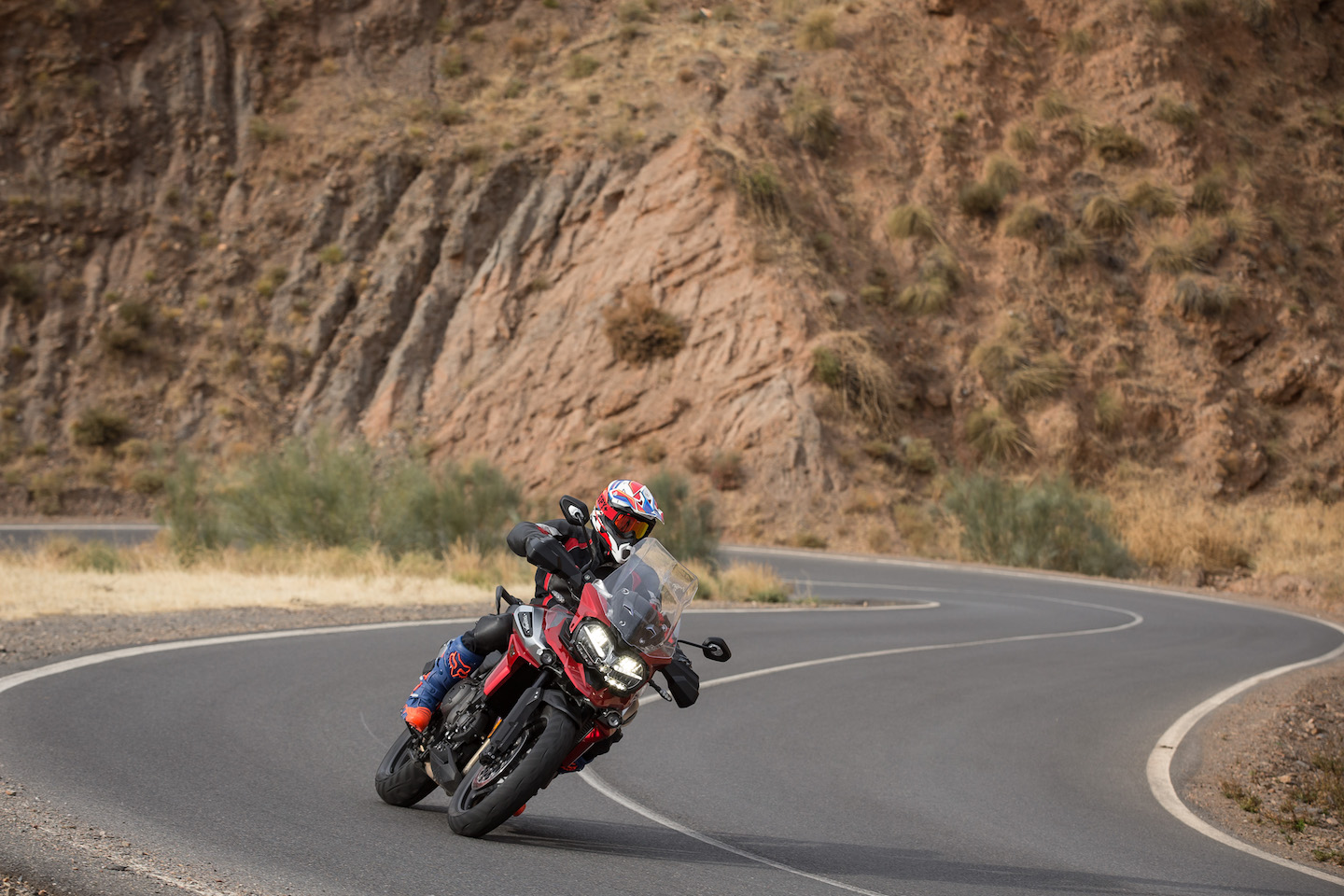 Of course, this also applies to the second top of the range model of the line, which I was also able to test on 250 kilometres of winding country roads: in contrast to the off-road-oriented XCa with its elaborate wire-spoke wheels, the 1100 Euro cheaper XRt rolls on cast aluminium wheels and comes without engine protection bars and aluminium underride guards, rally footrests and one of the two off-road riding modes. Apart from that, she is in no way inferior to her sister model XCa. Even after a day in the comfortably padded XRt saddle, riders will not experience any signs of fatigue – the ergonomically sophisticated, new Tiger 1200 is undoubtedly a good choice for frequent riders, world travellers and long-distance travellers. The fact that the five Tiger 1200 models for 2018 make two horsepower more in each case, however, is not noticeable in practice. With 141 hp, these big cats are nevertheless bursting with strength and you’re unlikely to be bored on the long distance, without abandoning their motto “Slow Down to Go Fast”.

The five model versions of the new Triumph Tiger 1200 will be available from December. More information at http://www.motorrad-magazin.at/modellnews/triumph-tiger-1200-2018-test