PERFECTION AS A STANDARD

It is hot, really hot, it is noon, the ardent sun above us. One Harley, two guys, white t-shirts and blue jeans. The street is glowing beneath our feet, somewhere in Carinthia. Good times. On the way to David Widmann, head of National Custom Tech, we are getting checked out by children while passing villages and farms. Straight roads and turns, we cover kilometer by kilometer. At the end of a crushed rock road we take a turn, the springs pushing, dust behind us. 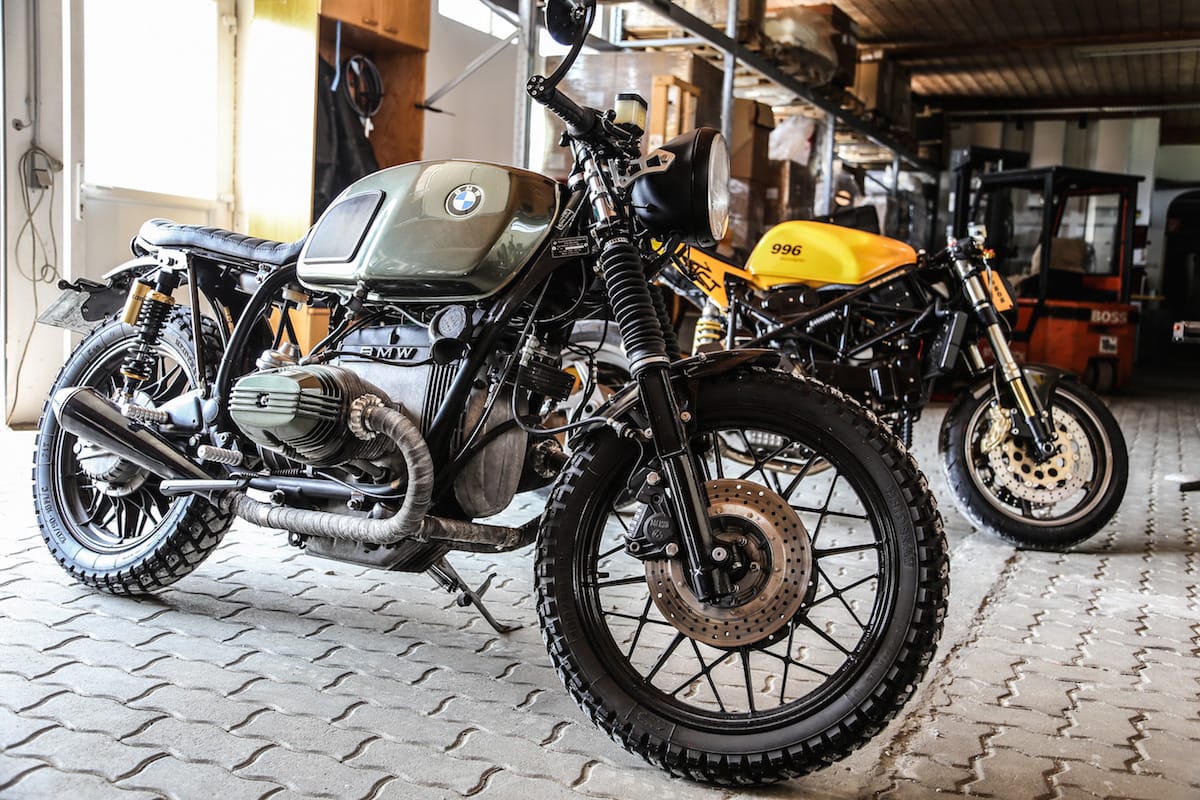 They are distinct bikes, developed in the 1960s by the young subculture of the Ace Cafe, a roadhouse in the north of London, which organized races to the next roundabout. You had to be back before the chosen single on the jukebox finished playing. Of course, showing off, but why the hell not? That’s what they screwed for, demounted parts – especially the covering, because that is what is unnecessarily heavy. The bikes should have been naked, you have to look at the power with your eyes, rebellion, against conservatism, fuck the establishment. A new look had been created, a lifestyle was born – Cafe Racer.

We arrived – green lawn, yellow garage. There are old metal badges nailed to the wall, a rusty grill sits with the cold grey ash from yesterday in front of the entrance, two camping chairs. The door opens, two bikes are sparkling out of the semidarkness and around the corner comes David, blue oily pants and a washed-out shirt. Smooth eyes, no smiling, the hair gelled to the back, handshake one, handshake two, a good start.

He doesn’t talk a lot, he screws instead, you can feel that. He founded the business just a couple of months ago, but there are requests for the whole next year already. He owns two other businesses, the first one was founded in 2012, producing traditional Austrian curlings, market leader after two years, the other one: dealing with cars. He is 25. „You have to take the risk! If you try to calculate everything, try to reach one hundred percent, you will never dare it!“ He recently raced a hobby-ducati-competition, third place. Yes, he does it, he doesn’t just talk about it.

Stubby-handlebars are good, the bike has to be deeply crouched, the mufflers must shine, tuned up is a duty. Usually they are built as twoseaters, but the real phat ones are singles. We let that through on the nod. It takes David about 70 hours to enable an old bike to be reborn. He bonds, chromes, drills and yes, he beats. The production of the leather seats and the varnishing are sourced out – the varnishing because of magisterial obligation, the leather seats: „because i’m not a sewer, that would just look not that good.“ Quality is important. 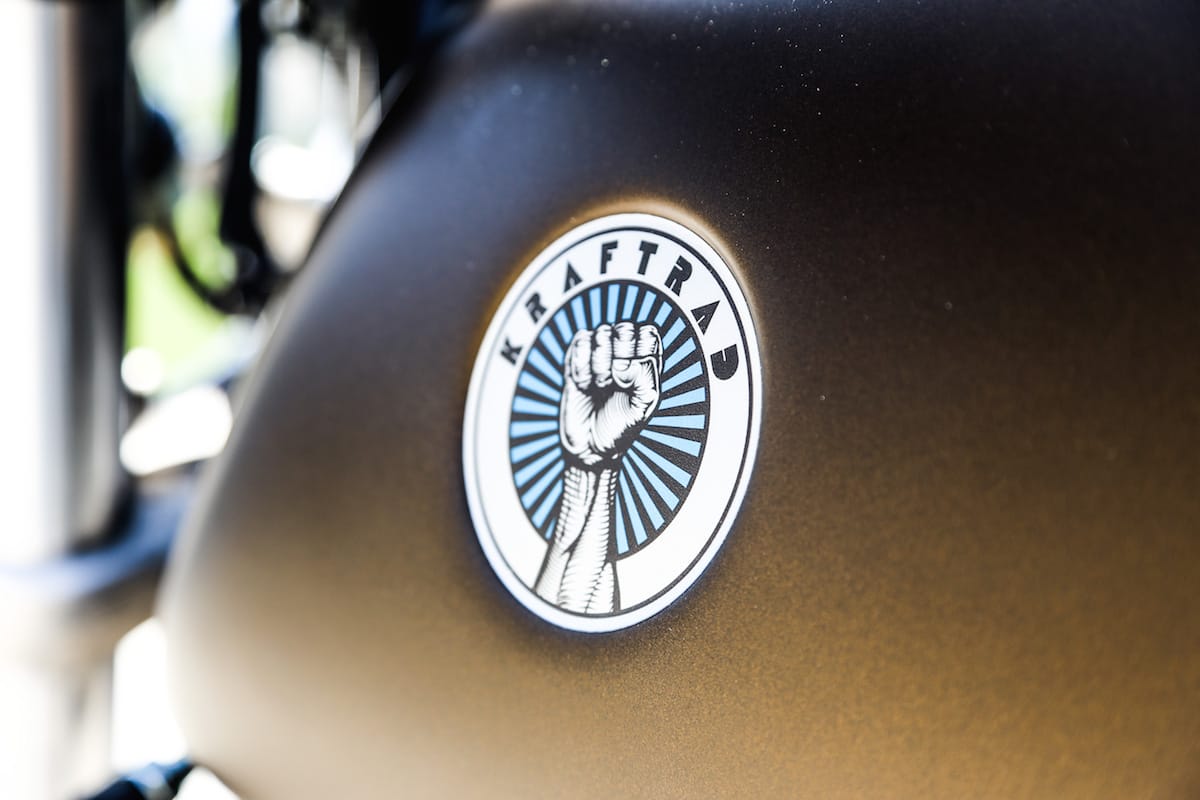 There are three bikes in the garage right now: two BMWs, green tank and a silver one, grinded down, invisible blinkers, black round floodlights, that’s the way it should look like. The third bike: a yellow Ducati 996, carbon frame, carbon rim, that’s about 5 kilos, an especially produced rear, that makes 125 PS for 170 kilos. What do we say? Phat! He reaches for the starter, we look at each other, he presses it, thundering, what a thrilling sound, we are grinning, we can not help us. He twists the gas, just a little twitch, earsplitting, the moment we got goose bumps. We can’t do words in this moment, we just do archaic sounds! No kidding, what would you do?

Next to this machine from hell there are two more bikes, propped up, looking like skeletons, the cables are dangling, the motor is covered with a white blanket, the battery had just been installed by Kurt Kosjek, Davids chief-mechanician. „There are batteries, which are so small, that you don’t even recognize them, try it!“ He is right, we aren’t able to find it, he has to show them to us – just a small black box, the size of a bigger paper book, installed underneath the seat, tight.

David is a trained production-technician and worked as a locksmith in the parental company. His dad is a bike freak as well, their most loved tour is „to the Seebergsattel, the Scheidersattel, the Loiblpass, the Vrsicpass.“ If they have time for this trip, they need to start early in the morning, around six o’clock, and come back at sunset. Now he is grinning. Getting tired sometimes? „No!“ And now he is smiling. He likes it, talking about it and showing his stuff, and he likes it, that we are listening, astonished like small schoolboys. „Thursty?“ – „Water, please.“ – „Water, well, but just because of the heat!“ – „…“ – „I get it.“ 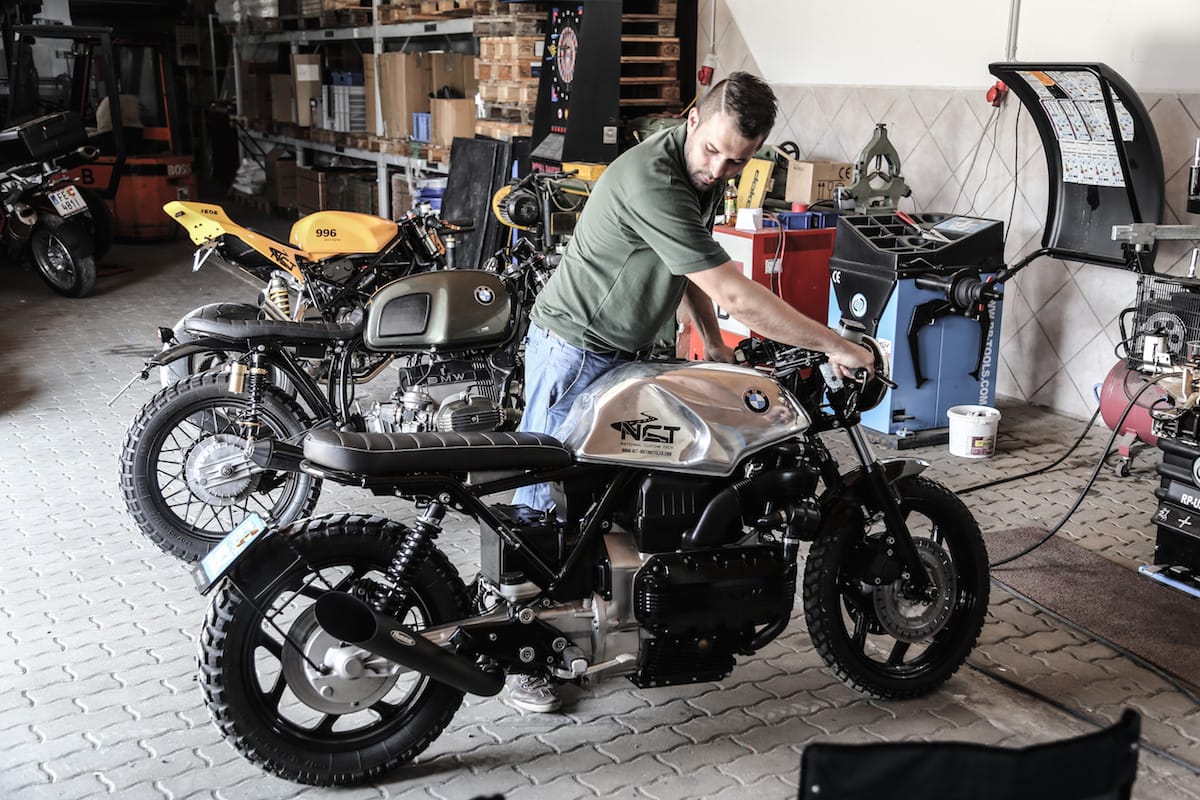 In the stockroom there are eight raw bikes, if customers are coming, who don’t own a bike, „so that i can offer them something out of which they can choose.“ Of course he needs to be a businessman too. One of those he is looking forward to rebuild and which will be his new showcase, is a Gold Wing, really! Red, phat, everything about this bike looks just heavy, even the Radio, „but I will not need that thing.“ Sure, the Cafe Racers need to be light. Soon he will start disassembling it, „no idea, what it looks like underneath this crazy costume.“

He never does drafts, he gets images in his head the moment he looks at a machine for the first time. When he starts disassembling, concrete ideas come into his mind. Why is he able to fix everything? „I always just did. But first you have to know, what you actually can do, without a little clue it doesn’t work, there needs to be something in you, and then, then you you have to train yourself to become better and better.“ Sounds easy, but what he is doing, isn’t easy. Every single bike is one of a kind. „If I get the same bike twice, from two different people, i make two different new bikes, because i always consider who is riding the bike. That needs to fit!“

We are enthused, about everything, about him, about the Cafe Racers, about everything that guy is doing. After one hour he needs to leave, we would like to stay, but the way he welcomed us, the way he sees us off. Calm, because he knows what he is doing, and that it amazes people, that is what he is working for. Handshake one, handshake two. A good departure.