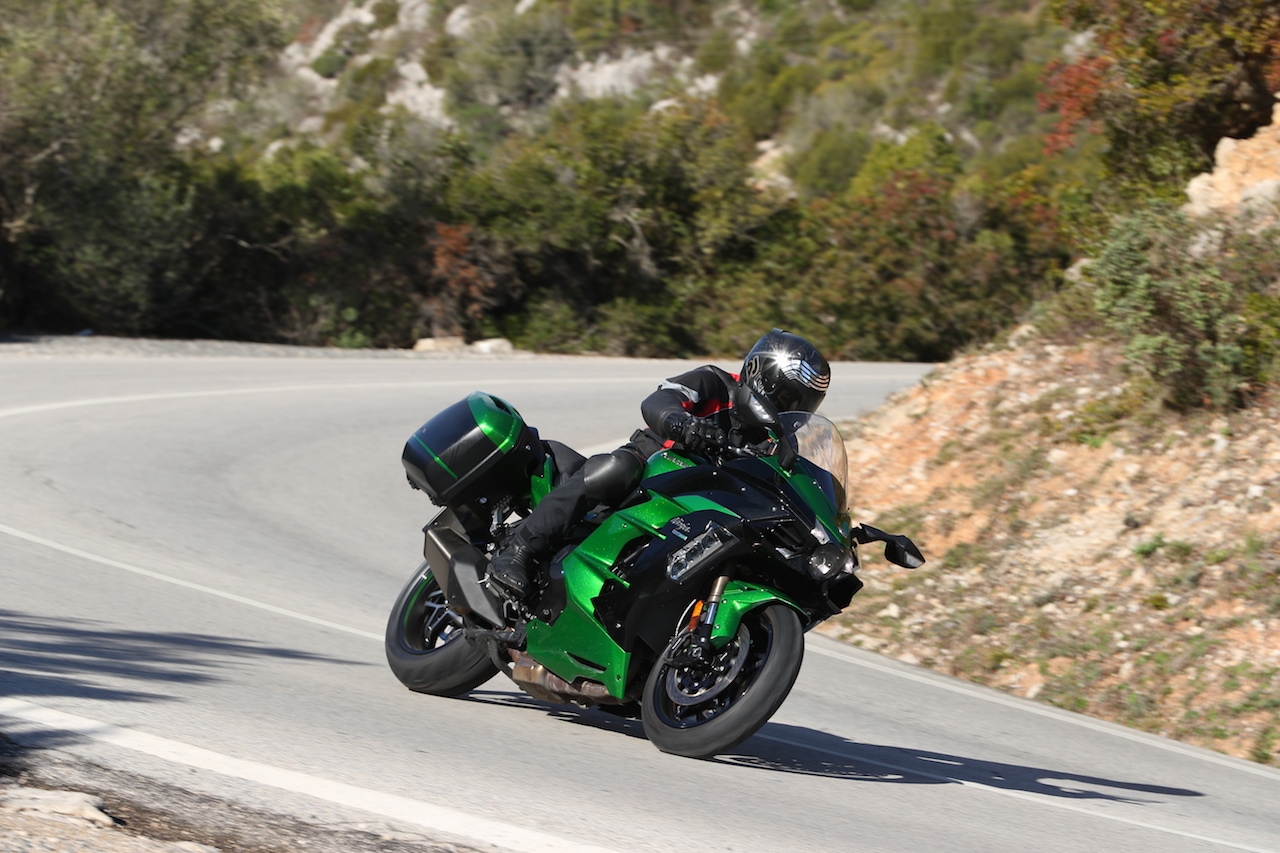 A motorcycle is only fast enough when you are standing in front of it and are afraid to get on. I personally am sincerely convinced of that. Because in addition to many practical, clever arguments, by means of which one tries to be convincing in a conversation with critics of the motorized two-wheeler, one particular property certainly makes motorcycles incredibly desirable to me: the sheer unreasonableness of their existence.

A prime example of this is the new Kawasaki H2 SX with supercharged engine, 200 hp and 137 Newton meters (4 Nm more than the standard H2). Strictly speaking, a sports tourer with such almost grotesque overpowering is completely unnecessary on public roads – especially in times when the legally permitted maximum speed in traffic is being successively curtailed at the urging of many (so-called) traffic experts. Nevertheless, Kawasaki deserves the highest praise for the courage to convert their elite high-speed weapon H2R (or their road homologated supersport counterpart H2) to a courageous touring vehicle, that thanks to larger production quantities (and less manual labor in the production) will be affordable for a wider audience. The H2 SX will be available as a heavily stripped base and fully equipped SE model. I could test the SE version, which is visually easily identifiable by the green and black paint finish, extensively on the country road and race track. 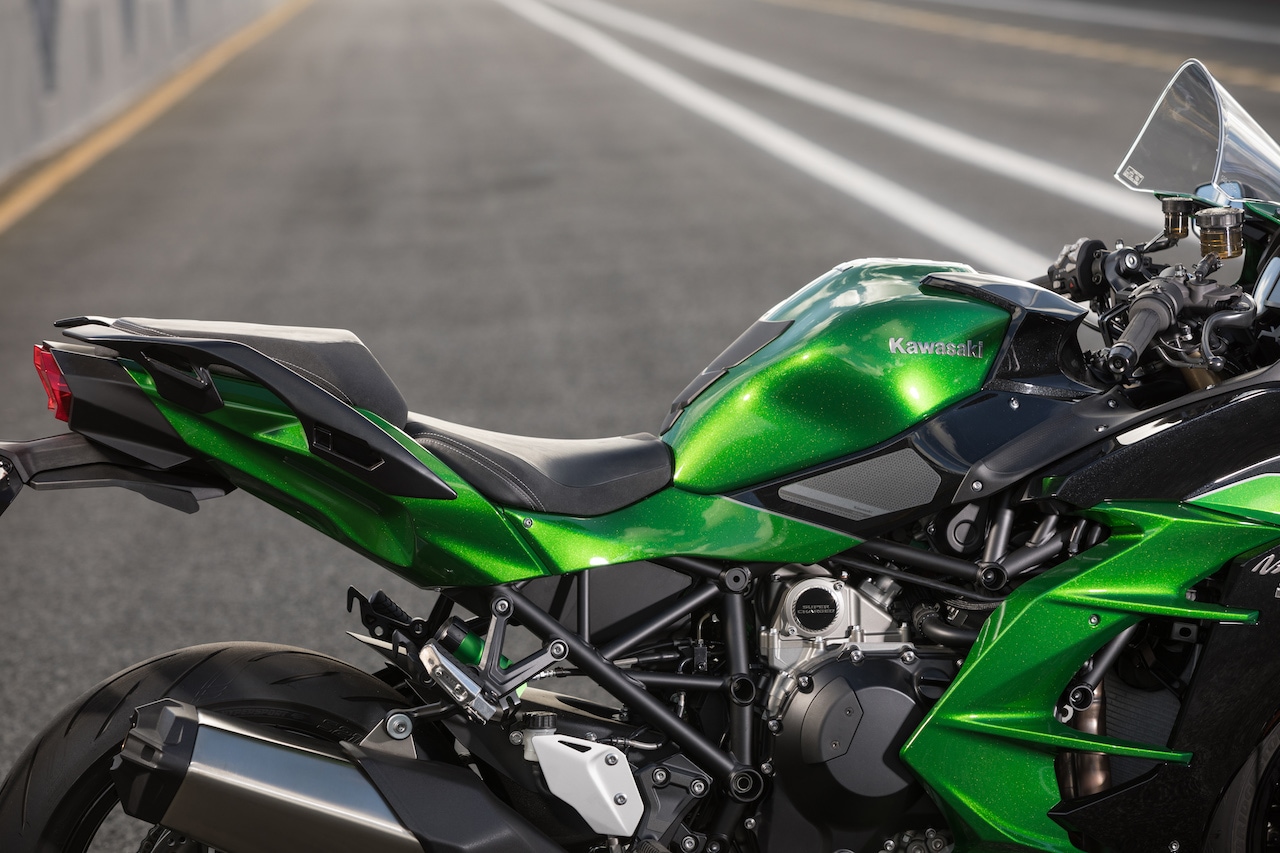 Hand on heart: if you describe the driving experience on the latest H2 model directly after a testdrive, you think no second to the color display in the cockpit, the smart electronics or the surprisingly large seating comfort – the incredible compressor powerhouse between the thighs, whose power overshadows all other features of the H2 SX is too emotional and memorable. So much, that it’s hard to put the impressive driving experience into words. Only the self-experiment remains, if you want to understand the nature of the green speed queen from Japan. 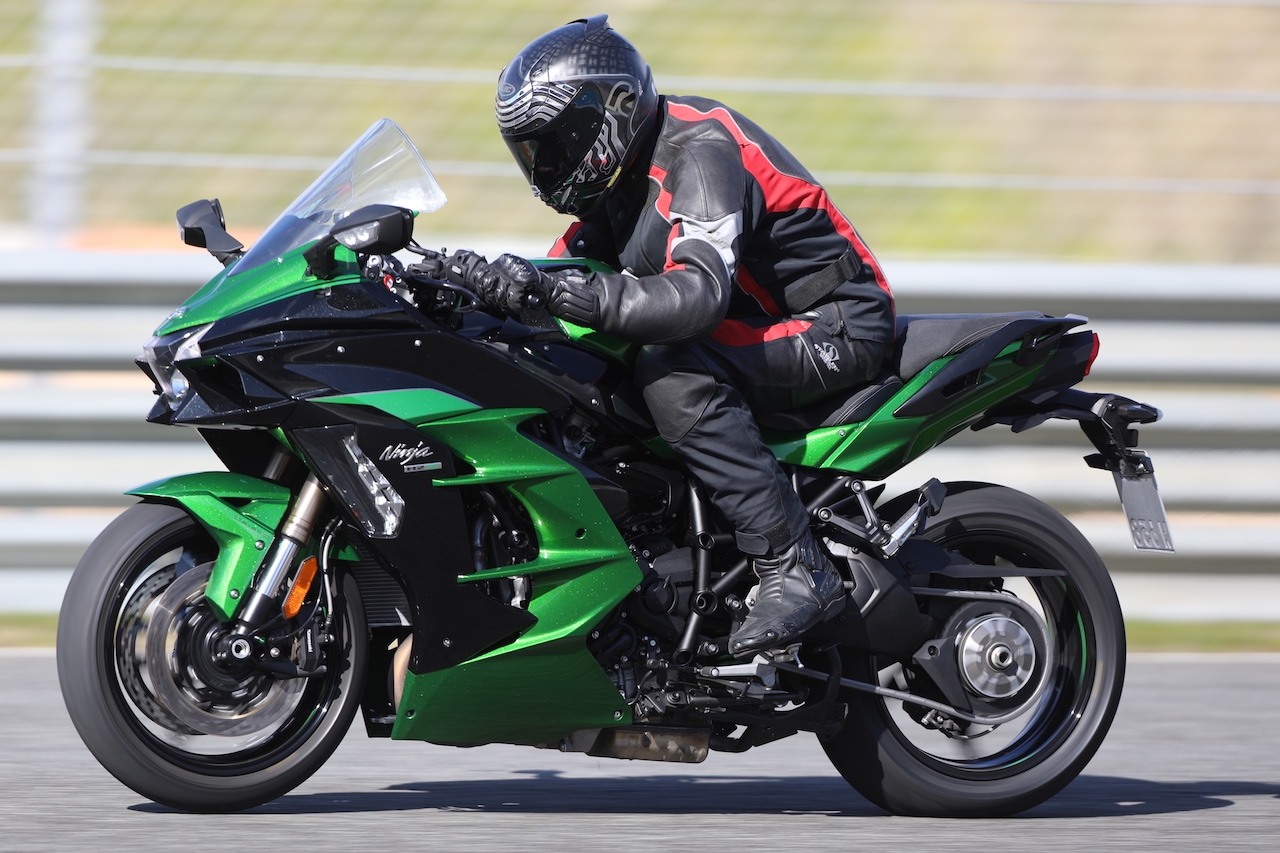 At the opening of the throttle valves it’s over. A jerk goes through the Kawasaki and my bottom is pressed vehemently to the front edge of the passenger seat. The H2 SX sprints at medium engine speed with an enormous, seemingly inexhaustible punch. The loader sucks gigantic amounts of air at high speed into its compressor housing. At maximum speed, the CNC-milled impeller rotates at over 100,000 revolutions per minute (9 times faster than the crankshaft) – a lot faster than the speed of sound. Underlined by this supersonic chirping of the compressor first the traffic signs, then time and space blur in front of my eyes. The roadway guidelines rush by like laser beams in “Star Wars” and one secretly hopes to leap through the “light wall”. Or the double flash of a radar box.

The idea that the motorbike could ever run out of power despite mounted side cases, doesn’t come to my mind for even a second. Unlike her pilot: with high-speed through public traffic similar to the ride on a cannonball while one tends to stop breathing. However, the Kawasaki can’t help it, despite the touring equipment, it was originally built for the speed rush – but the man behind the handlebars wasn’t.

Aerodynamically sophisticated, the H2 SX holds track incredibly stable and the four-piston pliers bite perfectly metered into the 320 steel discs. The brutal airstream rattles not only on the helmet, but also on the pilots’ nerves, despite the high Plexiglas disc (standard on the SE version). After a few seconds you take back gas voluntarily with wet hands and relax still clearly at rapid speed (in the eyes of the strict law enforcer). Punish yourself at crawl 130 on the highway? This seems almost unimaginable on tour with the H2 SX. 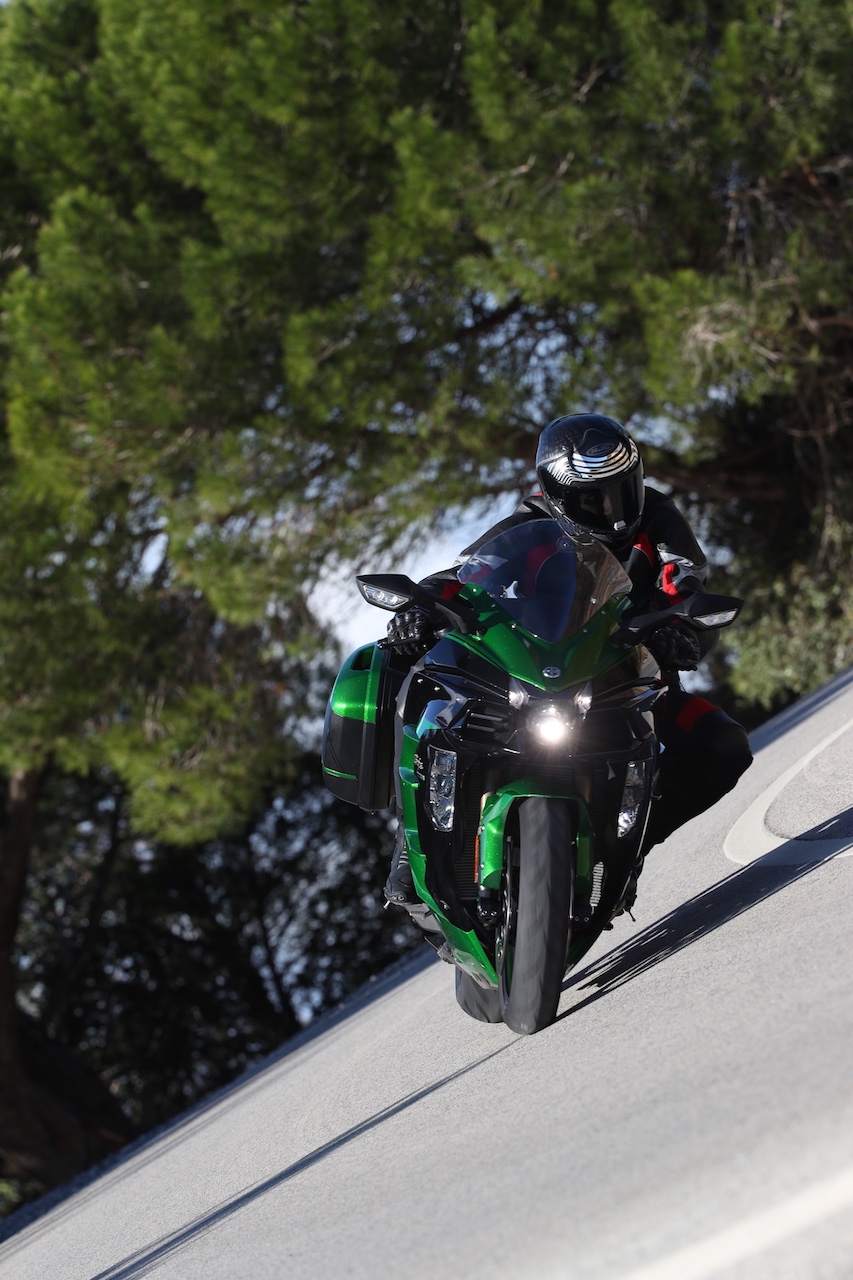 But even with absolutely law-obedient driving on the highway, I gave the H2 SX my full attention. In fact, I never thought that the imposing Portuguese coastal landscape on the Kawasaki powerhouse could be enjoyed so relaxed. With surprisingly easy handling and a moderate seating position, the H2 SX collects a surprisingly large number of sympathy points and is even suitable for city traffic, without the pilot having to accept performance compromises when driving briskly. This even makes contemplative, extended motorcycle trips painless. When tilted, the fully-inflated 260-kilogram H2 SX SE drives surprisingly light-footed and without resistance. Thanks to its sophisticated geometry and sophisticated Kayaba suspension, there is nothing to complain about in terms of stability and accuracy in the curve radius. Apart from the helmet, the upper body is efficiently protected from the wind. The Quickshifter works flawlessly even at low revs and thanks to cruise control, you can easily get on the freeway stages without fearing plainclothes policemen.

The workmanship of the technology pioneer made in the Japanese Akashi is flawless on top of that, it focuses all the craftsmanship of the Kawasaki Group. The service interval of the H2 SX is generous with 12,000 kilometers. The hard use of gas has been drastically improved compared to the standard H2, but could be a bit gentler, especially in the second gear, which is often used. Unbelievable that the Kawa feels completely different when cruising appreciatively than at full throttle. The 998 cubic four-cylinder engine delivers brute propulsion really only on explicit pilot’s request. Gently and innocently, the H2 SX whispers discreetly through the landscape and doesn’t hint at the hurricane, with which it suddenly rips the driver forward infernally at the gusting accelerator. It’s just a good thing that the traction control efficiently keeps the impulsive rear wheel in check. 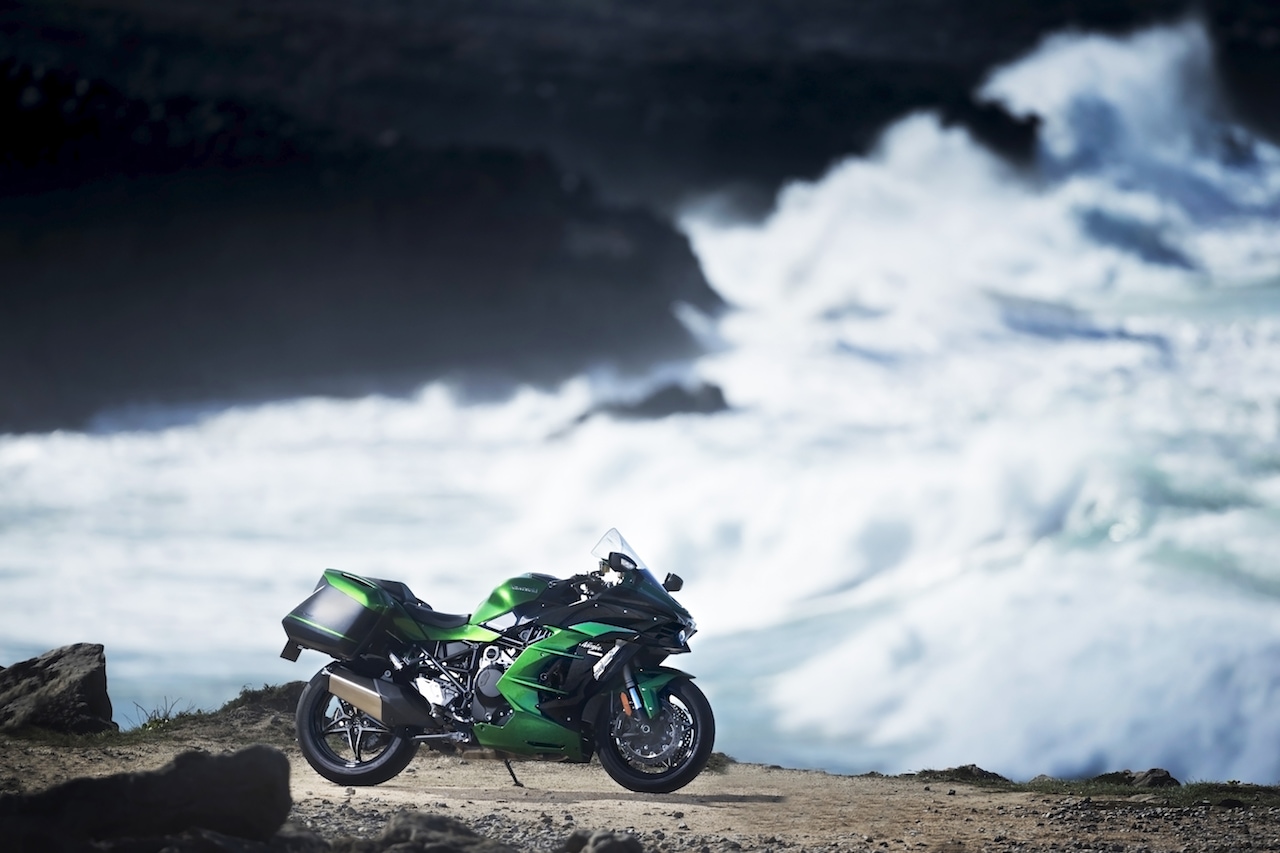 After the first day of testing, it’s clear that the H2 SX is not as free from the conventions of reason as it was supposed to be. In fact, it proves in practice that you can also go on a wonderful journey even on an ultra-serious sports motorcycle thanks to appropriate modifications. Although it does not necessarily need 200 horsepower or boost pressure for sporting tours, what good is it against a few extra power reserves if, for example, you want to get through the Deutsches Eck quickly on your way to France on the motorway?

I mean, a decent amount of performance has never done any harm – and every pilot can decide for themselves when to use the immense power reserve. It’s a good feeling to know that you could always, if you wanted. The H2 SX is also a motorcycle for the mind, but more so for the heart. No other sports tourer can begin to offer what the overdose of the H2-SX compressor is: pulsating adrenaline and great emotions. Their uniqueness, however, is very expensive. Technology has its price. Already for the conventional H2 SX you have to turn down 23,499 euros. Because the standard model, however, relinquishes far too many key features (launch control, quickshifter, TFT display, LED cornering light, TFT display, steel flex lines, milled wheels, etc.) and the comfort and touring features must order extra, the noble H2 SX SE at 27.499 euros is undoubtedly the first choice – and in view of their lush full equipment not overpaid.